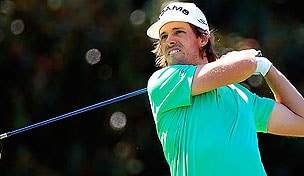 ORLANDO, Fla. – It is normally officials from the Arnold Palmer Hospital who praise the players during the annual PGA Tour stop at Bay Hill, but it was Aaron Baddeley heaping accolades on the iconic medical center after a difficult week for his infant son Jeremiah.

Last Wednesday Jeremiah, who turned 14 weeks old on Wednesday, was diagnosed with pneumonia at a hospital in Tampa, Fla., and he was given breathing treatments, but Baddeley said his son’s symptoms worsened over the weekend.

“He wasn’t really eating and got really dehydrated,” Baddeley said at Bay Hill.

On Monday Baddeley and his wife took Jeremiah to an Orlando, Fla., area doctor. Later that day Baddeley checked Jeremiah into the Arnold Palmer Hospital, a beneficiary of this week’s event, for overnight observation. Jeremiah Baddeley was released from the hospital on Tuesday.