Scott leads by four entering final round of Open 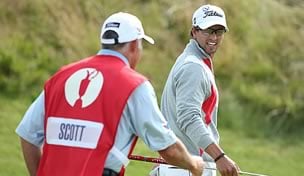 The oft-discussed parallels between Adam Scott and Tiger Woods are striking, sure.

They both employed Butch Harmon.

But the most important parallel, the one that resonates now on the eve of the final round of the 141st Open Championship, is this: Scott is 18 holes away from denying Woods his first post-scandal major – and winning one of his own.

Showing no signs of relenting during a near-flawless performance Saturday, Scott seized the outright lead on the front nine, then shot a 2-under 68 that gave him a four-shot lead at Royal Lytham & St. Annes.

“It’s a good position,” Scott said. “If I play a solid round of golf, it makes it very difficult for the other guys. So that’s all I’m going to concentrate on, my game, and not concentrate on anyone else.”

With a late surge, Graeme McDowell (67) leapfrogged Woods (70) on the leaderboard and played his way into the final group for the second consecutive major.

“It was my first time really in the cauldron in a couple of years,” McDowell said of his T-2 at the U.S. Open. “It renewed my belief in myself that I can do it under pressure.”

Playing alongside McDowell, not Woods, on Sunday should come as a relief to Scott. The Australian’s caddie, Steve Williams, was on the bag for 13 of Woods’ 14 major victories, but his unceremonious split with Woods last year still serves as fodder for many. That potential distraction no longer exists.

At 11-under 199, Scott is four strokes ahead of McDowell and Brandt Snedeker, five clear of Woods, and six in front of Ernie Els and Zach Johnson.

Snedeker (73), the second-round leader, hadn’t made a bogey in 40 holes, but proceeded to drop six shots on Saturday. A birdie on the final hole left him in a tie for second.

Woods (70) bogeyed two of his first three holes, and a few loose iron shots prevented him from mounting a sustained charge. A couple of missed putts didn't help, either.

The wind is expected to blow 25-30 mph in the final round – conditions that will bring into play Lytham’s thick rough and pot bunkers, but also reward the most solid ball-striker.

If Scott can hoist the claret jug Sunday, he will become the 16th different winner in the past 16 majors; the 10th consecutive first-time major winner; and the third player in the past four majors to use a longer-than-standard-length putter.

And, potentially, the latest to deal Woods another major disappointment.