After Doral win, Woods closing in on world No. 1 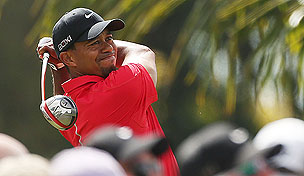 Tiger Woods didn’t reclaim the top spot in the Official World Golf Ranking on Sunday after his fifth victory in his last 19 PGA Tour stroke-play events.

But he’ll get there with another win.

Woods, who hasn’t been ranked world No. 1 since Oct. 30, 2010, trails Rory McIlroy by less than a point after his impressive two-shot victory at the WGC-Cadillac Championship at Doral. Neither Woods nor McIlroy are in the field for this week’s event in Tampa, meaning that Tiger will have a chance to become world No. 1 only if he wins in his next start, at Bay Hill.

The top two may have stayed the same, but the second WGC event of the season caused a few shakeups in the rest of the top 10.

Semi-retirement continues to treat Steve Stricker well. Playing only the third event of his 11-tournament schedule, Stricker’s runner-up finish at Doral was his second of the season and vaulted the 46-year-old from No. 13 to No. 8 in the world. Phil Mickelson, who finished in a four-way tie for third, also rejoined the top 10, moving up from 12th.

Scott Brown, who earned a dramatic victory in the opposite-field event in Puerto Rico, rose from 291st to 160th in the world, while runner-up Jordan Spieth, 19, also made a significant move, going from 469th to 276th. The first-year pro is also in this week’s Tampa field.