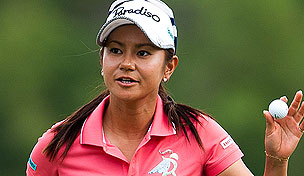 PHOENIX – Ai Miyazato took the RR Donnelley LPGA Founders Cup lead on a hot afternoon in the desert, playing a late four-hole stretch in 5 under for a tournament-record 9-under 63.

Returning from a whiplash injury sustained in a five-vehicle crash in Thailand, the Japanese star was comfortable in the heat Thursday as the temperature soared into the 90s. She birdied the par-3 14th, made a 20-foot eagle putt on the par-5 15th and birdied the par-4 16th and par-3 17th to open a two-stroke lead.

''It's just beautiful out there,'' Miyazato said. ''It's just always nice to play in this tournament. It's very enjoyable and I just had a good feeling this morning. I was just very happy to be here. The weather is just awesome and I was like, 'I'm going to do this today.' And there you go, I shot 9 under. I hit the ball well and my putting was really good and I think I had good course management.''

The nine-time LPGA winner was hurt three weeks ago while riding in a caravan of players on the way to the Bangkok airport. She withdrew the following week in Singapore as a precaution because of stiffness in her neck, shoulder and back.

''Right after Thailand, it was really hard,'' Miyazato said. ''Singapore was one of my favorite tournaments and I was really disappointed that I couldn't play, but I just tried to get nice and easy after that because my neck and my lower back were sore.

''I think I had a nice time off and now I feel fine. Just totally feels good.''

Comfortable in the area, Miyazato has a home in Phoenix at the Legacy Golf Resort and tied for second last year on Desert Ridge's Wildfire layout, a stroke behind Yani Tseng.

''I'm just staying home nice and relaxed and it makes me feel good,'' Miyazato said. ''It feels like a hometown.''

''I kept the round going to the last hole,'' Miyazato said. ''All the time, I could focus like every single shot.''

South Korea's Jee Young Lee was second, opening with a 65 in her first tournament since September.

''No golf like two months, and then I come back to Orlando and I train hard,'' Lee said. ''Work hard and practice hard.''

Candie Kung, Brittany Lang, Gerina Piller and Pornanong Phatlum were three strokes back at 66, and Lexi Thompson, Jiyai Shin, Sandra Gal and Katherine Hull-Kirk shot 67. Shin, her hair dyed orange a year after showing up at the event with a blonde look, won the season-opening Australian Open.

''I didn't hit the putts on the center of the face at all the whole time,'' Kung said. ''I have absolutely no idea how those balls went in, but I was able to miss my shot close to the hole. I hit about two shots on the clubface today. ... I just laugh about today. I actually get mad when I hit it solid all day and don't make a single putt. It's weird. It's golf.''

The top-ranked Tseng, riding a 22-event, 50-week winless streak, had a 70 in the featured group with No. 3 Stacy Lewis and Paul Creamer. Lewis opened with a 68, and Creamer, also shaken up in the accident in Thailand, shot 69.

''It was ugly,'' said Lewis, the winner in Singapore for her fifth victory in her last 22 tournaments. ''I missed a lot of putts.''

The 18-year-old Thompson rebounded from a double bogey on the par-4 third – her 12th hole – with a birdie on the par-3 fourth and a chip-in eagle on the par-5 fifth.

''I had a few rough holes out there, but I fought back and that's what golf's all about,'' said Thompson, featured in the March issue of Teen Vogue.

Juli Inkster, at 52 the oldest player in the field, topped the group at 68. The Hall of Famer won the last of her 31 tour titles in 2006 at Superstition Mountain

Michelle Wie opened with a 74. She missed the cut in Australia, finished 45th in Thailand and tied for 45th in Singapore. In 11 rounds this year, Wie has broken 70 only once, closing with a 69 in Singapore after a third-round 77.

DIVOTS: Jane Rah had a double-eagle 2 on the par-5 15th, holing a 3-wood from 226 yards. It was the 32nd albatross in tour history and first since Hannah Yun last year on the same hole in the second round. Rah shot 73. ... Jennifer Gleason and Meena Lee had aces. Gleason used a hybrid on the 171-yard 14th, and Lee holed out with a rescue club on the 170-yard sixth. Gleason shot 68, and Lee 76. ... Jaclyn Sweeney opened with a 71. She earned a spot in the field last month with a victory in the Symetra Tour's VisitMesa.com Gateway Classic.