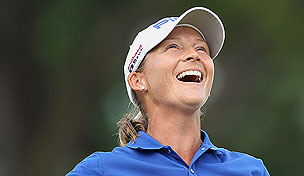 Stanford’s 6-under-par 66 moved her within three shots of the lead when she signed her scorecard. It was her lowest score in 39 trips around this golf course.

Stanford, 35, is a five-time LPGA winner looking to win her first major. She nearly won her first 10 years ago. She was in that three-way U.S. Women’s Open playoff at Pumpkin Ridge with Hilary Lunke outlasting Stanford and Annika Sorenstam.

“I think at the time, I didn’t realize what was going on, and the longer I play these majors, the more I realize what they’re about and how truly close I was and didn’t even know it,” Stanford said. “It’s driven me, but it’s like anything. It’s a roller coaster.”

Stanford has seven top 10s in majors with two in the Kraft Nabisco. She tied for third here two years ago when Stacy Lewis won. Though Stanford arrived this week not feeling good about how she was striking the ball, she said two days with her coach, Mike Wright, helped her find some confidence.

“He just has this way of putting things in perspective,” Stanford said.