Jutanugarn, 17, gaining on Lewis in Thailand 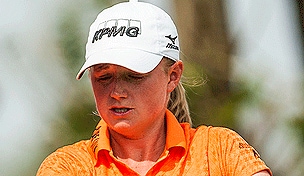 Stacy Lewis will start the weekend trying to hold off yet another teen phenom in women’s golf.

With a 3-under-par 69 Friday at Siam Country Club, Lewis is bidding for a wire-to-wire victory at the Honda LPGA Thailand. At 12-under 132, Lewis is three shots ahead of Thailand’s own Ariya Jutanugarn, a 17-year-old Ladies European Tour pro who might have something to prove after her request for a petition to join the LPGA was denied last year.

Lewis will be paired with the homegrown Thai phenom in the final pairing Saturday. Lewis played with another popular Thai in the first round, Pornanong Phatlum.

“Pornanong got a lot of support, but I think tomorrow is going to be even crazier, being in the last group, and Ariya is kind of the rising star from here,” Lewis said. “I think Ariya is going to be a great player. She has played a lot of pro events so she knows what it’s like. You have to watch out for her just like anybody else.”

Lydia Ko, New Zealand’s 15-year-old amateur sensation, shot a 71 Friday and is tied for ninth, eight shots back. Rolex world No. 1 Yani Tseng rebounded from her opening 75 with a 68. Tseng is 11 shots back in her bid to win this event for a third consecutive year.

Jutanugarn is half of a gifted sister tandem. Her older sister, Moriya, 18, shared medalist honors at LPGA Q-School in December to earn her playing privileges. She is also in this week’s field and sits T-45.

Ariya is considered the more accomplished of the sister tandem. She won the U.S. Girls’ Junior two years ago and lost to Ko in the semifinals of the U.S. Women’s Amateur last summer. Last year, Ariya petitioned for a waiver of the LPGA’s rule requiring members be 18 so that she could try to play the LPGA with her sister. They’ve rarely been apart in their budding golf careers. After Ariya was denied a waiver, she went out and gained her Ladies European Tour card by  winning the LET Q-School. The family has been split apart for the start of Ariya’s and Moriya’s pro careers with Ariya’s father accompanying Ariya to LET events and the mother accompanying Moriya to LPGA events.

The sisters made headlines in Thailand winning LPGA and LET Q-Schools in a two-week period.

If Ariya wins in Thailand this weekend, she could petition the LPGA yet again for a waiver to try to claim the two-year exemption that comes with an LPGA victory.

“One can think that one can win,” Ariya said. “I hope that I can win, but I don’t want to put pressure on myself. I’m just going to play my game.”