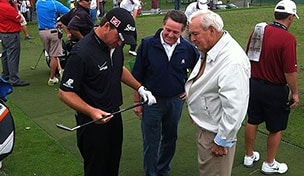 ORLANDO, Fla. – Graeme McDowell didn’t have to wait until the 72nd hole to be handed a prize from Arnold Palmer this week.

While hitting balls on the range at Bay Hill after Wednesdays’ Arnold Palmer Invitational pro-am, McDowell watched Palmer approach with a 1-iron and asked McDowell to try it. McDowell hit it flush with his first swing. When he tried to give it back, Palmer insisted he keep it.

It was an Arnold Palmer designed iron with Palmer’s signature engraved on it.

“It looks like one that he had been messing around with in his work shop,” said McDowell, who shot even-par 72 on Thursday. “It had quite a long shaft in it. I would say it was longer than a standard 1-iron shaft. It had a full leather grip. It was cool.”

McDowell said he will find a place to keep it.

“I’m certainly going to keep that in my special section of my garage,” McDowell said.

McDowell lives in Lake Nona on the other side of Orlando, but he said he is going to make a special effort to visit Palmer at Bay Hill now.

“It’s fun to hang out with the King,” McDowell said. “He’s such a cool character, great personality. I’d like to take the opportunity to hang out and have a couple adult beverages with him.”