AskLav: Getting to root of McIlroy's problems 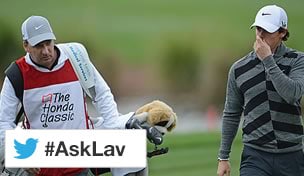 Getty Images
PEBBLE BEACH, CA - JUNE 16: Padraig Harrington of Ireland looks on during a practice round prior to the start of the 110th U.S. Open at Pebble Beach Golf Links on June 16, 2010 in Pebble Beach, California. (Photo by Jeff Gross/Getty Images)  -

Of course Rory McIlroy’s golf swing is causing him more pain than his bothersome wisdom tooth. But we’d be foolish to take the latter ailment too lightly. Consider this a public service announcement.

Though there is no official list for such things, there are few pains quite as agonizing as dry socket. Days after a tooth extraction, the dentist crams a piece of gauze or sponge down into the inflamed socket, which then rubs against the exposed bone. It’s enough to make a grown man shriek and beg for mercy.

It’s little wonder that Rory wants his childhood dentist, the only man he trusts, to perform the procedure, even if the fine oral surgeons of Palm Beach County are offended.

My biggest question: Why wait?

Why let the issue fester for weeks or, in his case, months? Knock out the procedure after Doral. Endure the swelling and discomfort for a few days. Resume normal preparations for Houston (and The Masters).

But hey, don’t take my advice. I’m just a guy who forgot to gargle with warm salt water three times per day and developed dry socket. Did I shriek and beg for mercy? Oh, well, no, that was the guy down the hall.

With that, your mailbag questions for this week:

No, no. My teeth are fine now. Loyal readers will recall my recent Day at the Dentist.

Rory took a public-relations hit, no doubt, but this controversy will fade. Taking a page out of Phil Mickelson’s tax playbook, in his news conference Wednesday McIlroy was his usual self – charming, honest, thoughtful, engaging. That was how he built up so much goodwill between he and his fans, and the press, in the first place. He will be just fine … so long as that proper takeaway gets ingrained sooner rather than later.

@ryanlavnergc Any truth to the rumor that Rory is now dating Elin? #AskLav.

Aha! Perhaps we have found the source for those ridiculous Rory-and-Caroline-breakup rumors, which, of course, were fueled because the lovebirds hadn’t publicly tweeted at each other for a few days. Shoe-leather reporting, that is.

@ryanlavnergc should there be more WGC events outside the US. Only 1 of four outside at present. Plenty of great worldwide courses! #AskLav

I’m all for putting the “world” back in the World Golf Championships. The most logical tournament to move outside the continental U.S. would be the Match Play, and not only because its contract with Dove Mountain expires after next year. (Unless the Tour wants to turn the Sunday final into 18 holes match play, then a giant slalom competition.) WGC stops at Doral and Firestone ideally fit the schedule – and the HSBC Champions has a November date – so why not move the Match Play to Brazil, or South Africa, or Puerto Rico? If only so one year I won’t have to shiver while covering the Round of 64.

Who did you take in fantasy golf this week & why? Would love to know what matters most to the Golf Channel experts. #AskLav #MyTeamSucks

Well, all of our picks can be found here. This week I took Matt Kuchar, Charl Schwartzel, Robert Garrigus and Russell Henley. Typically I look at only two things: recent form and past history at that event. It’s a simplistic approach that may also explain why I’m 17th out of 22 in our GC standings. But hey, I don’t regret any pick I’ve made this season. I know, I know. Whatever helps me sleep at night …