#AskLav: Uncovering the seedy side of golf 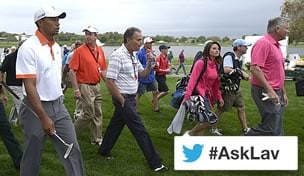 All is fair in love and war, the saying goes, so in the ongoing battle between Tiger Woods and the “stalkarazzi,” Round No. 729 goes to Tiger after an emphatic verbal and social takedown this week. Becoming Facebook official, with professional photos to boot? A brilliant bit of revelatory strategy.

Sadly, these money-hungry photogs will still sniff and snoop, dive into dumpsters and hide in trees and harass his two young children, determined to get the blurry photo that drives pageviews for another day. The war continues.

But if nothing else, the brief glimpse into Tiger’s very public private life – and constant, bitter struggle against the stalkarazzi – was a reprieve from the other conflicts that have proved just as divisive lately: anchorers vs. traditionalists; fast players vs. slow pokes; Tiger guys vs. Rory guys; flat bills vs. visors; pro-bifurcators vs. sane people.

Fortunately, the #AskLav mailbag is here to remind you of those:

Well, McIlroy clearly doesn't think so. The last time we saw him, during the Sunday 65 at Doral, he looked pretty good. But let's not forget, of his 8 competitive rounds this season, 7 of them were unspectacular. Would I have liked to see him tee it up at Arnie's Place? Of course. And if he struggles next week in Houston, and then can't find his game at Augusta, he certainly has opened himself up for second-guessing.

Ridiculous at this point, right? It's been 50 days since the Sports Illustrated report that Vijay Singh used deer-antler spray. The Tour is always secretive when it comes to player discipline no disclosure of fines, for instance but we need an update on the issue, or at least something more substantial than 'the investigation is ongoing.' We can assume there has been an appeal. The Tour likely tested the spray to determine if it did contain a banned substance. They're following their protracted protocol. But with Singh able to continue playing, the Tour brass faces a potentially hairy situation if the Big Fijian finds himself in contention on the weekend. If we want answers, let's root for that.

Are you the pilot for the new Golf Channel helicopter camera? #AskLav

No, but I sure hope that gadget fares better than Denzel Washington's plane in 'Flight.'

Which golfer goes nuts on the camera drone first? #AskLav

Sergio Garcia is the favorite, according to Vegas oddsmakers, with Pat Perez and Tim Herron close behind.

@ajgagolf Pace of Play has changed golf for the better at junior level, anyway the @pgatour adopts a similar system? #AskLav

Couldn't hurt. What the American Junior Golf Association has instituted has helped tremendously. Last year, the average pace of play on the AJGA was 4 hours, 23 minutes. That is light years hours! better than college and amateur golf, and most Tour rounds. At the elite level, players aren't deterred by, say, a $10,000 fine when there is a $1-million, first-place prize. Strokes are money.

@ryanlavnergc A 12 year old playing in a Euro Tour event, how crazy is that? #AskLav

Nearly unfathomable. At 25, I don't feel old often. But think about it: A 12-year-old should be in the seventh grade. At that age I was good at gym-class dodgeball, and being incredibly awkward around girls. To play in a European Tour event at 12 years old? Crazy. Hopefully his mom packs a good lunch that week.

@ryanlavnergc #AskLav what is the thought process behind viewers being able to call in penalties from home? #AskLav

The armchair rules officials believe they are protecting the field, and it's irrelevant whether the infraction is spotted on the property or 3,000 miles away. I've never been a fan of this, simply because the players who aren't on the TV telecast aren't subjected to the same kind of scrutiny, and players should police themselves. Some have called for a rules official to be stationed in a TV truck. At least that's a better alternative than being flooded with calls from rules aficionados camped on their La-Z-Boy.

.@ryanlavnergc Going to Augusta for the first time for the Tues. practice rd. I've had some input, but what are some musts?! #AskLav

Buy an egg-salad sandwich, maybe two. Spend a few hours at Amen Corner. Check out the spot where Bubba hit the hooking wedge on 10, and where Larry Mize chipped in on 11, and where Phil split the trees on 13, and where Tiger pitched in on 16. And don't forget to drop a few Franklins in the merchandise center.

Well, the 18th hole is guarded by the Calibogue Sound down the left, with out-of-bounds stakes on the right. Try a straight ball instead.

Give me a birdie-fest! The U.S. Open could be brutal. So might the British, if the weather doesn't cooperate, like in 2002. The last time Oak Hill hosted the PGA, the winning score was 4 under. So I'll take the birdies at Augusta, with the roars and the Sunday charges. It may be the only major this season with a flurry of red numbers.