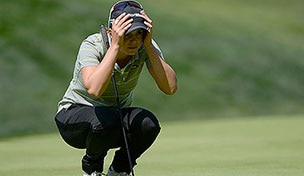 CARLSBAD, Calif. – Put Paula Creamer in a car these days and she's a mess after sustaining minor injuries in a high-speed crash a month ago in Bangkok.

Driving on a golf course is much kinder to Creamer, who shot a 4-under 68 on Friday to trail Beatriz Recari by one stroke after two rounds of the Kia Classic at Aviara.

Recari shot a bogey-free 67 for a two-round total of 8-under 136. Creamer was tied with Karrie Webb.

Creamer shot a 68 and Webb a 70 on the hilly, 6,593-yard Aviara course designed by Arnold Palmer.

First-round leader Jane Park shot a 69 and was tied at 6 under with Cristie Kerr, I.K. Kim, Inbee Park and Haeji Kang.

Stacy Lewis, playing her first tournament as the world's top-ranked player, carded her second straight 70 and was four strokes off the lead.

On cold mornings, Creamer said she still feels discomfort in her neck and shoulder. She was in the fifth group to tee off on No. 10 Friday morning and did just fine on Aviara's hills and big greens.

''My shoulder starts to bug me a little bit, but overall, I feel a lot better,'' said Creamer, whose best finish this year was third at Singapore the week after the accident. ''My neck is not 100 percent, but I'm not hurting myself when I'm out here and it's not affecting my game 100 percent.''

She and her caddie were hurt when the car that was taking them to the airport in a caravan of players after the LPGA Thailand tournament was involved in a chain-reaction crash.

Four weeks later, ''I'm a nightmare in the car,'' Creamer said. ''I'm awful. I have to drive or I have to be in the back seat where I can't see. It's getting better but still, I get a lot of anxiety before I even get into the car. My mom, my dad, they've been really good with me because I've been like, 'Watch out, watch out.' I have to just sit there and I put my music on and I just close my eyes.''

Creamer capped her round with a birdie putt on the par-4 ninth.

''I feel good,'' Creamer said. ''I'm ready for the weekend. Hopefully I can go out and keep doing what I'm doing and stay in my own world and see what happens on Sunday.''

Recari was two strokes better than her opening 69.

''I had great momentum from yesterday,'' the Spaniard said. ''I played really well. I felt like I left some putts out there. It was kind of shaky putting on the greens yesterday, so today I started with a good opportunity.''

She had birdie chances on Nos. 2-3 but they both lipped out. She birdied Nos. 5-6, ''and that got me a little bit more positive and just kind of keeping that momentum going.''

She then rolled in three straight birdie putts on 9-11.

''I just kind of cruised from there. I'm so very happy. I just played really solid.''

Michelle Wie shot another 74 and missed the cut for the second straight week and the third time in five tournaments this year.

DIVOTS: The flagstick on No. 9 is topped with an American flag, and one of a handful of Marines stationed at the green holds it while standing at attention while the threesomes putt. ... Jin Young Pak made a hole-in-one at the par-3 14th to win a Kia, but still shot a 75. She was right at the cut line of 3 over. Her ace came one hole after a double bogey, the second of her round.