Hossler upset in Round of 32 at U.S. Junior 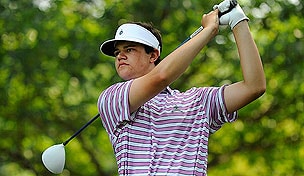 Back playing against kids his own age, Beau Hossler was unable to duplicate his U.S. Golf Association success.

Hossler, the breakout amateur star at last month’s U.S. Open in San Francisco, was upset Thursday by Andrej Bevins in the Round of 32 at the U.S. Junior Amateur.

It’s been a whirlwind few weeks for Hossler. After he briefly held the lead during the second round of the U.S. Open (and eventually finished T-29, after a Sunday 77), the 17-year-old from Mission Viejo, Calif., received a sponsor exemption into the PGA Tour’s AT&T Classic, where he missed the 54-hole cut. Last week, he finished second at the Junior World Championship.

On Wednesday, in the Round of 64 at The Golf Club of New England in Stratham, N.H., Hossler defeated Sean Smothers, 4 and 2.

“I’ve been really exhausted, to be honest with you,” Hossler told the Boston Globe on Wednesday. “I’ve only had a couple days off.”