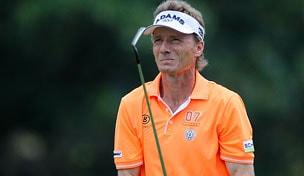 BOCA RATON, Fla. – Bernhard Langer is a Hall of Famer who has won the Champions Tour money title four of the last five years. Tom Pernice Jr. is a career journeyman who at 53 tried to reach the PGA Tour through Q-School last year.

They have different pedigrees, but they ended in the same place Friday – tied for the first-round lead of the Allianz Championship at Broken Sound after 6-under 66s.

Langer, who holed out a bunker shot to win here in a playoff in 2010, birdied three of the last four holes. Pernice was even through eight holes, but played the next six holes in 6 under, including an eagle at No. 5 when he holed a pitching wedge from 128 yards, to charge into contention.

Langer's finish was more impressive because he was weakened by the flu.

''It's no fun playing sick, but I played pretty strong coming home,'' said Langer, who was hosting the field for dinner at his Boca Raton home Friday night. ''I could have been six or seven under the last seven holes.''

Since turning 50, Pernice has concentrated on playing the PGA Tour more than the Champions. But after losing full-exempt status on the PGA Tour and posting just one top-10 finish on the Champions Tour last year, Pernice knows it's time for a change.

'''I always thought I was going to play on the PGA Tour as long as I was competitive and had status,'' Pernice said. ''Why wouldn't you want to play on the greatest tour against the world's best players as long as you can? But I'm committed to playing the Champions Tour this year. I guess I need to act my age.''

Pavin was tied for the lead before he bogeyed his 17th hole and failed to birdie the par-5 18th. Mediate closed with three consecutive birdies, and could have been tied for the lead, but his eagle putt at the 18th came up just short.

''I didn't eat today. I was a little nervous and felt that coming in,'' Mediate said. ''I'll change that from now on.''