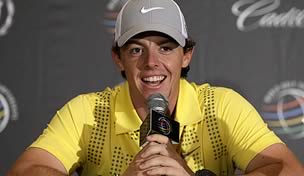 DORAL, Fla. – Here are the best comments from Rory McIlroy’s news conference Wednesday at the WGC-Cadillac Championship, a forthright, 24-minute sit down:

• On the Honda Classic WD: “I realized pretty quickly that it wasn’t the right thing to do. No matter how bad I was playing, I should have stayed out there. I regret what I did. But, it’s over now and it won’t happen again.”

• “I’ve been putting a lot of pressure on myself to perform and I’ve been working so hard and not really getting much out of it. That’s just been the frustrating thing and that’s what happened.”

• “I learned that when the tough gets going, I’ve got to stick in there a bit more and I’ve got to grind it out. There’s no excuse for quitting and it doesn’t set a good example for the kids watching me, trying to emulate the way I do.”

• “I actually think in the long run, Friday will be a blessing in disguise. It was like it just sort of released a valve and all that sort of pressure that I’ve been putting on myself just went away.

• “I’ve worked my ass off over the last four or five days to really try and get this right. Still, it’s a work in progress. As I said, there’s no quick fixes in golf but I’m going to go out there this week and all I care about is my swing.”

• “I’m 23 years old, I’m still learning. I’ve hopefully got 20, 25 more years of this to do and having the pleasure of talking to you guys (media) every Wednesday.”

• “I owe it to the tournament to go play it again. The Honda has always been an event that I’ve enjoyed and now having a place in the area, I don’t see any reason why I wouldn’t play it next year.”

• On potential of adding another tournament before the Masters: “I was waiting to see how I was going to do this week and then make a decision from there. I know if I want to play Tampa next week I’ve got to enter by Friday and obviously there’s Bay Hill after that.

• “The equipment is fantastic. I have no problems at all. When I make a good swing, the ball goes where I want it and the flight I want it, so I know that it’s not that. It’s just getting my swing on the right path.”

• On a rumored split with girlfriend Caroline Wozniacki: “I’ve read what’s been written. Just because I have a bad day on the golf course and Caroline loses a match in Malaysia, it doesn’t mean that we’re breaking up. Everything on that front is great and I’m looking forward to seeing her next week when she gets to Miami.”