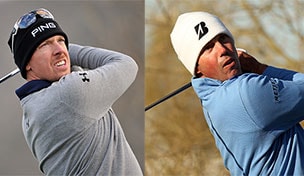 MARANA, Ariz. – All you needed to know about Sunday’s conditions at the WGC-Accenture Match Play Championship could be found on the leaderboard.

Consider that early Saturday – on a postcard-perfect day in the desert – Scott Piercy had seven birdies in 18 holes and lost his Round 3 match to Steve Stricker. Twenty-four hours later Matt Kuchar had four bogeys and four birdies against Jason Day and easily won.

Frigid winds that whipped to 30 mph turned the year's first World Golf Championship into an episode of “Survivorman,” with Kuchar and Hunter Mahan weathering the storm and advancing to the 18-hole matinee for the title.

And that’s a good thing, we think.

Kuchar rolled in a 22-footer for birdie at No. 6 before the winds came up and was three holes clear by the turn. When the two traded bogeys at the 12th and Day’s third at the 13th nestled into a jumping cholla the Australian’s hopes, if not the match, were over.

“This course is a challenge without wind, and I think it's a challenging driving course, approaches with the greens, as much slope as they have, and then putting is difficult,” said Kuchar, who closed out Day, 4 and 3. “Pars are really good scores with the conditions the way they are right now.”

Mahan’s semifinal bout with Ian Poulter had a similar battle-of-attrition feel to it. The defending champion was even par through nine holes and 2 up before he did his best Poulter impersonation at the 12th hole, chipping in for birdie from behind the green after flying his tee shot under the grandstands.

Mahan closed out the 2010 champion at the 15th hole for a 4-and-3 victory to set up a rematch of last year’s quarterfinal duel between Mahan and Kuchar, which Mahan won, 6 and 5.