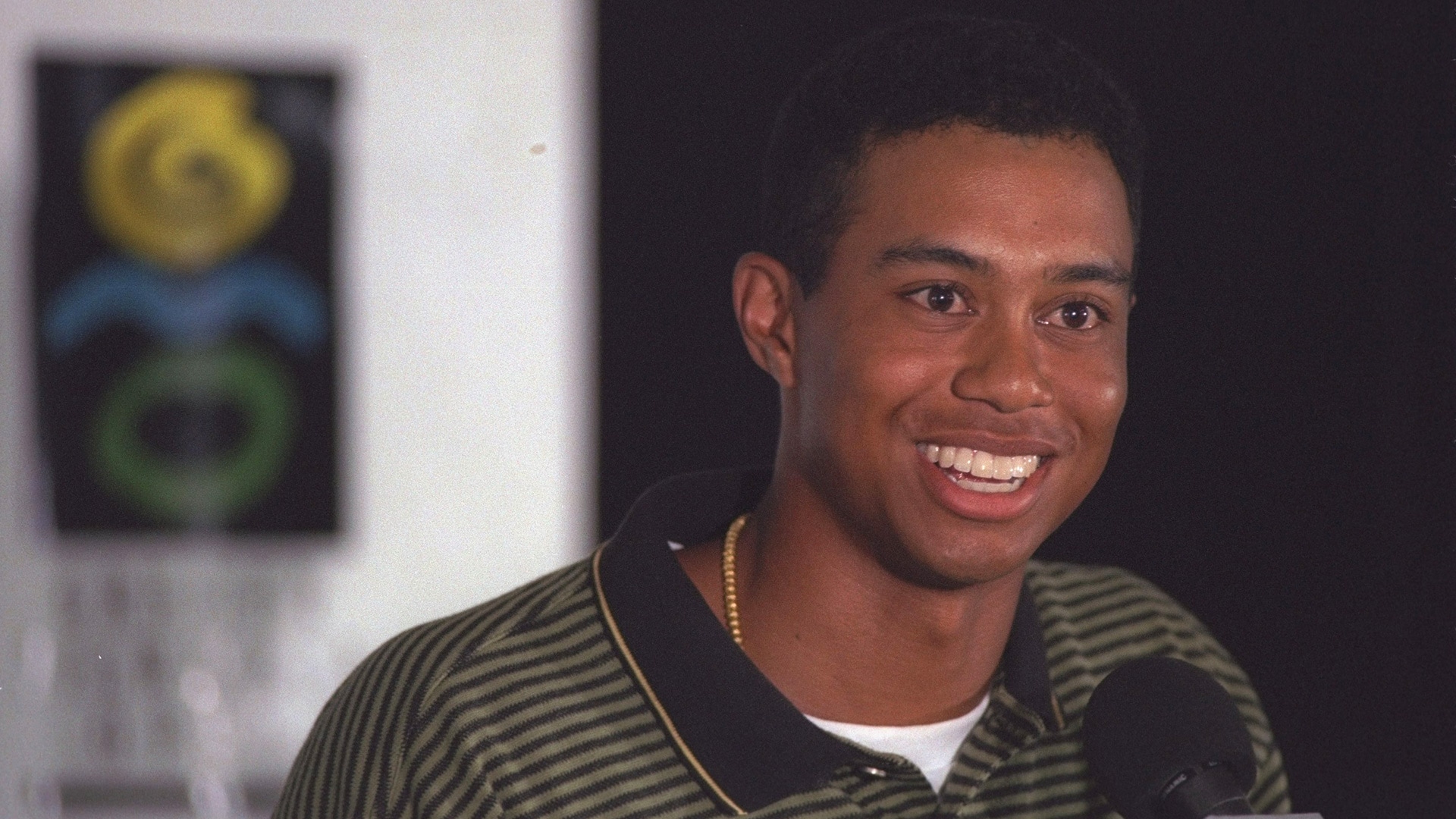 Dare this list look like the 25 greatest plays ever written, which would surely be dominated by the one name – William Shakespeare – Tiger Woods' accomplishments over the last quarter century would leave scarcely any other events or people to consider. Suffice it to say, his presence atop this list is by a considerable margin, as it should be for someone who won three consecutive U.S. Amateurs, four majors in a row, seven PGA Tour events in a row, and on another occasion, six and five respectively. He made 142 cuts in a row. He beat the field’s average score in 89 consecutive rounds. He was PGA Tour’s Player of the Year five years in a row, the same number of years in a row he led the Vardon Trophy, the Tour’s award recognizing the lowest scoring average.

In both 2000 and 2007, Tiger’s scoring average was 67.79; in the history of the PGA Tour only once has any player ever gotten within one shot of that number. His blowout major wins and his comeback wins – from needless and inexplicable swing changes, from scandal, from injury, while injured, and from the chipping yips – have created a frenzy the sport had never seen.

Woods’ presence has been more impactful than we can comprehend. Watching him, one is consumed by the unspoken feeling of awe. The feeling one gets when staring at a country sunset; inspired by the view one minute, feeling insignificant the next. The chasm between him and his competition has been absolute, as if he were somewhere ahead waiting for the rest to catch up. He made his fellow players, the PGA Tour, every entity connected to golf and every media outlet that covered him vastly wealthier.

Not much more can be said about the man who meant more to the game than any other person in its history. The game’s popularity grew parallel to his. The PGA Tour Champions might not have succeeded without his participation. Golf Channel might not have made it without his participation. No sporting legend ever treated fans, media, sponsors, tournament organizers, fellow players and their sport with more respect.

In an era when today’s players too often punctuate shots with profanity laced celebrations, call out one another on social media and write illegibly signatures that kids wait all day for, it would serve the professional game well to remember that Arnold Palmer was adored only in part because he won prolifically earlier in his career.

Mainly he was adored because he lived the self-augmenting truth that how you treat others, like the idea of tithing, will come back tenfold. There’s a tax on fame, someone once said, and it’s 15 seconds for every fan. Palmer gave all of us much more than that.

We judge athletes and athletic performances by how they change their sport and no event and no player changed their sport more than Se Ri’s 1998 U.S. Open win. There is a before and after on the LPGA and it is the cataclysmic win by the South Korean who at the time was the only player from her country in the top 50 on the tour’s money list.

South Korea has one-fifth the population of the United States and now produces almost three times as many players in the top 50 of the women’s world rankings, a phenomenon that has the golf world scratching its head. But its roots are in Se Ri Pak’s 1998 U.S. Open win.

4. Evolution - and Marketing - of the Golf Ball

Solid-core golf balls had been around for decades but they came with a hard cover, which combined with the solid core, meant that the ball retained more of its shape at impact; subsequently more energy was delivered to the ball, which meant more distance. That distance, however, came at the cost of control and so the ball remained a product for amateurs. In the early 1990s, Bridgestone began experimenting with different materials to try to create the ultimate ball that offered distance and control. An early adopter to that ball, the Precept EV Extra Spin, was Nick Price, and over the course of four years he went from 97th in driving distance to sixth. From just inside the top 40 in the world to No. 1.

Spalding noticed and created a multi-layered ball of solid core construction called the Strata, which Mark O’Meara switched to in 1996 and was second that year in greens hit in regulation, having been 127th a few years before. In 1998, O’Meara won two majors using that ball. In 2000, Tiger Woods quit using the Titleist ball and started using the Nike ball, which was designed by Bridgestone. Switching two weeks before the U.S. Open that year to the solid-core, multi-layered construction of the Bridgestone-made Nike ball, Tiger had a technological advantage over the vast majority of players. When he won that U.S. Open by 15 strokes more than a few Tour players noticed.

Before the year was over, by mid-October, Titleist introduced the Pro V1, their version of the solid-core multi-layered construction. That week on Tour, 47 players switched to the Pro V1 and one of them, Billy Andrade, won. Titleist was not the first to create this ball but because they had the majority of Tour players under contract, and dominated the ball market globally, their marketing machine changed the game. By March of 2001, 90% of players on Tour were using a solid-core multi-layered golf ball. In 2000, the average driving distance on Tour was 272.7 yards; in 2003, it was 285.9 yards. The game changed, not because of the Pro V1, but because Titleist changed balls and made sure everyone heard about it.

In 1981, at age 26, Norman played in his first Masters, jointly holding the first-round lead and eventually finished fourth. It was that week – for his aggressive style, muscular build and whitish locks – that he was given the moniker of the Great White Shark. The late and much famed CBS producer, Frank Chirkinian, said that the camera loved Norman, that you couldn’t take your eyes off the man. The camera may well have loved him, but it seemed as if the golf gods hated him.

As his career played out it was clear that nobody in history was so obviously talented, and so obviously cursed. The improbable last hole and playoff hole-outs of David Frost, Robert Gamez, Bob Tway and Larry Mize, each one like the violence of a slammed door, in the aggregate, providing a conjectural destiny of a man meant to endure agony. Although, he still won plenty and held the No. 1 spot in the world longer than anyone before Tiger, it was the shock of the losses that seemed to linger with him.

For an athlete, the inability to forget is infinitely more devastating than the inability to remember. But there he was at the 1996 Masters with a six-shot lead through 54 holes, his game as sharp as a knife and he, as cool as a new razor blade. There has never been a golf course or a tournament that has so obviously had its finger on the pulse of the game, that could provoke or predict a star more acutely or close the curtain on a career more beautifully or brutally than Augusta National. The fated finishes of Jack Nicklaus in 1986 and Ben Crenshaw in 1995 had neither analogue nor precedent for sentimentality. But fate also carries a lead pipe.

Norman began to unravel early on that Sunday and when the Shark rinsed one at the 12th, the calamity seemed irreversible. In contrast to his previous shocking losses, this was a slow bleed. All on him. Twenty-four years later and the image of his nemesis and the winner, Nick Faldo, consoling him on the 18th green, is no less shocking. 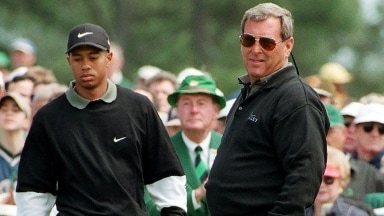 Brandel Chamblee reveals his top 25 most impactful moments of the last 25 years. Here's a look at Nos. 11-15. 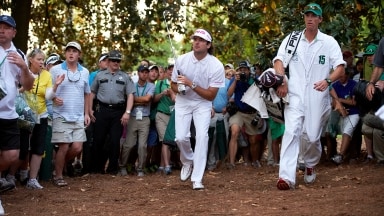 Brandel Chamblee reveals his top 25 most impactful moments of the last 25 years. Here's a look at Nos. 21-25. 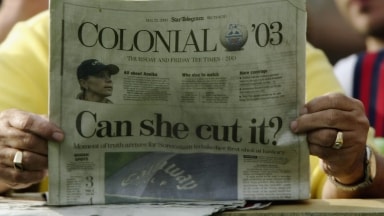