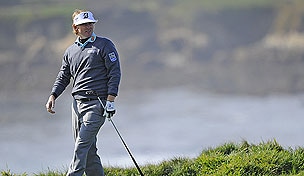 After two straight runner-up finishes, Brandt Snedeker heads into the weekend at the AT&T Pebble Beach National Pro-Am in position to do one better.

After a 4-under 68 at Spyglass Hill Friday, Snedeker holds a share of the 36-hole lead at 8 under alongside Ted Potter, Jr. The duo leads by one shot over a group that includes John Merrick, Fredrik Jacobson, Patrick Reed and first-round co-leader Hunter Mahan.

Playing the more difficult of the three courses in rotation during the second round, Snedeker carded four birdies without making a single bogey en route to his second straight round of 4 under. An early leader in the FedEx Cup points race, Snedeker finished four shots behind both Tiger Woods at the Farmers Insurance Open and Phil Mickelson at the Waste Management Phoenix Open each of the last two weeks.

Potter, who carded a 3-under 67 at Monterey Peninsula Friday, is seeking just his second top-10 finish since 2011, but appears to make the most of his opportunities to contend. His only other top 10 came at The Greenbrier Classic last year - where he went on to win a playoff for his first career PGA Tour victory.

Playing at Monterey Peninsula, Mahan finished with birdies on his final two holes for a 1-under 69 Friday. His fellow co-leader from Thursday, Russell Knox, did not fare quite as well, shooting a 1-over 73 at Spyglass Hill to fall back into a tie for 10th.

Two former AT&T champions remain well off the pace after two rounds. Mickelson, the defending champion and in search of his fifth title at Pebble Beach, shot a 1-under 71 at Spyglass Hill, and will begin his third round Saturday at Pebble Beach in a tie for 41st at 2 under. Dustin Johnson, twice a winner here, bounced back from a poor round Thursday to fire a 3-under 69 at Spyglass Hill, but still finds himself at even par overall, currently outside the projected 54-hole cut.