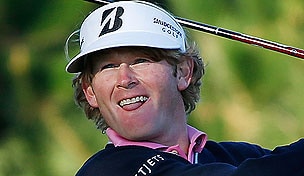 The venue may change, but the story remains the same – Brandt Snedeker is among the leaders heading into the final round of a PGA Tour event.

After runner-up finishes each of the last two weeks, Snedeker fired a 4-under 68 Saturday at Pebble Beach and shares the lead alongside Tour rookie James Hahn heading into the final round of the AT&T Pebble Beach National Pro-Am.

Now under par in 17 of 18 rounds thus far in 2013, Snedeker carded four straight birdies from Nos. 6-9 on the host course Saturday. Despite missing multiple birdie putts from inside 15 feet Saturday, the reigning FedEx Cup champion has a plan in place to do one better than his recent runner-up finishes.

'I've got to take advantage of the opportunities I didn't (take advantage of) today,' he explained. 'Over the course of the weekend, you're going to have some key putts that you have to make ... hopefully tomorrow, they'll all go in.

''You never know what tomorrow holds, but I feel like I'm in great position, and I'm going to be surely more prepared, no matter who is around me in the last group. 'I'm probably going to have the most experience of anybody in those last couple groups of winning a golf tournament.''

Hahn, who gained YouTube fame with last week's 'Gangnam Style' celebration at TPC Scottsdale, is in position for his third high finish in just his fifth start of the year. After a bogey-free, 6-under 66 at Spyglass Hill in which he birdied his final three holes, Hahn joined Snedeker at 12-under 202, one shot clear of Chris Kirk and two better than Patrick Reed.

Richard H. Lee sits alone in fifth place at 9 under after a 6-under 66 Saturday at Pebble Beach, while a large group one shot further back includes Retief Goosen, Jason Day and Robert Garrigus, who matched Lee's 66 at the host course.

A pair of major champions made moves up the leaderboard Saturday, turning a possible missed cut into a chance to contend. After consecutive rounds of 72, Vijay Singh carded a 66 at Spyglass, moving into a tie for 32nd at 4 under. Reigning U.S. Open champion Webb Simpson did one better, moving into a tie for 11th at 7 under after a round of 65.

Defending champion Phil Mickelson appeared comfortably inside the cut until the 18th hole at Pebble Beach, where he made a triple-bogey 8 after slipping on rocks alongside the fairway (video). The blemish dropped Lefty to 1 under for the week, but he was still able to make the 54-hole cut on the number. Two-time Pebble Beach winner Dustin Johnson, along with former major champions Padraig Harrington and Geoff Ogilvy, were among those that failed to make the cut.

''He's been playing great golf these last couple of weeks ... and it looks like this could be his week,'' Mickelson said of Snedeker. ''But final round at Pebble Beach, a lot of things happen and he has to play one more good round. I know he has it in him, but he still has to go do it.''

''The last two really upset me because I felt like I really stayed patient all day and had done a great job and hit two great shots on the last couple of holes,'' Snedeker said. ''Those are the kind of putts you need to put some room between you and whoever else you're going to be around.''

Hahn would gain a Masters invitation with a win, but he wasn't looking that far ahead.

''I'm not even in next week's tournament, so to me, a top-10 finish would be great,'' he said. ''So if you want to compare the Northern Trust Open to Augusta, we can. I would love to play another week out on Tour, but just to learn from Brandt Snedeker, he's one of the hottest golfers on the planet right now.'

''I feel like I'm playing well just because I feel comfortable. You know, comfortable and having fun, that's when I'm playing my best golf. ... I feel like my attitude on the golf course is better than it has been in recent years, and not getting so frustrated out there, just kind of enjoying the moment. I keep saying that, but it's a blast to be inside the ropes and a member of the PGA Tour.''

DIVOTS: Mike Weir, who missed every cut last year, had four birdies on his last eight holes to make his second cut this year. ... Among those missing the cut were two-time Pebble winner Dustin Johnson, Padraig Harrington and Geoff Ogilvy. Ogilvy, who has not broken par in his last three events, is assured of missing the Match Play Championship. ... Dallas Cowboys quarterback Tony Romo, who played with Tiger Woods last year, is leading the pro-am with Jason Day as his partner. San Francisco 49ers coach Jim Harbaugh and Detroit Tigers pitcher Justin Verlander were among those making the cut.

Material from Doug Ferguson of The Associated Press was used in this article.