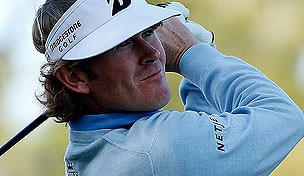 ORLANDO, Fla. – It isn’t often that the FedEx Cup points leader – a player with one victory and three other top-three finishes so far – can shoot an opening-round 76 and feel encouraged, but that was exactly the case for Brandt Snedeker on Thursday.

In his first start after missing five weeks due to a strained intercostal rib muscle, Snedeker carded three bogeys and a triple at the Arnold Palmer Invitational, but was happy with how he felt after the round.

“I was a little apprehensive this morning when it was so cold,” he said. “Once it warmed up, it felt great and I feel good right now, so all systems go.”

Snedeker maintained that any issues on the scorecard were due to rust rather than the injury itself.

“I felt really good,” he added. “I’m actually encouraged, despite the fact that I shot 4 over. My iron game is not where I want it to be; that’s what killed me today. Besides that, I drove the ball really well, my putting was good. It’s just my iron game that really killed me today. If you don’t do that well, you’re going to pay the price and I did.”