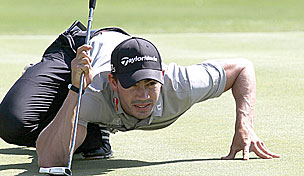 PALM BEACH GARDENS, Fla. – At first glance, Camilo Villegas’ name atop the Honda Classic leaderboard may not look out of place. After all, he won this tournament just three years ago – his third PGA Tour victory in a three-year span.

Plenty has happened to his on-course prowess in the time since, though. And none of it has been good.

Last year, Villegas played in 25 events without finishing better than a share of 18th place. The result was a final placement of 150th on the money list, which gives him conditional status, but hardly makes him a full-time PGA Tour member.

Instead, he is receiving sponsor exemptions and playing out of the past champions category, hoping to collect enough starts to fill out a full schedule.

“This game is great when you're playing good,” said Villegas, who opened with a 6-under 64 Thursday, buoyed by a final-hole eagle. “When you're out here missing cut and missing cut, I don't care what people say – yes, we're blessed to have this job, but it's not that much fun.

“And that's what was going on. I'm not saying it wasn't fun; I mean, I'm very grateful to do what I do, but it wasn't as fun. The game was kicking my butt a little bit. That's a good way to put it. But I know who I am. I know I belong out here. I know how good I can be. And therefore, that's why you're just going to keep your head up and keep working.”

Villegas has been working with instructor Darren May at the Bear’s Club and while he admits that his confidence was rattled after last year’s unsuccessful campaign, he has a better mindset this time around.

“You always learn from mistakes,” he explained. “Not that I made mistakes, I just played bad the last year and a half. It's a little reality check, nothing wrong with that. It gives you a little bite to come back and be who you know you can be.”

On Thursday, he played a bogey-free round at PGA National, where he obviously owns good vibes. In addition to his victory here, he also lost in a playoff in 2007. With his parents in attendance and home-cooking each night, he feels as comfortable at this event at anywhere.