Howell starts hot at SHO in bid for Masters 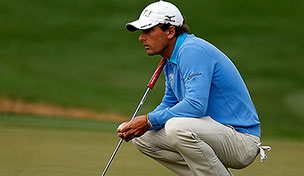 HUMBLE, Texas – When it comes to needing a last-minute qualification for the Masters, Charles Howell III has been there and done that before.

The Augusta, Ga., native has found himself right on the cusp of getting into the field at the 11th hour in past years, which leads to this question: Does that make it any easier this time around?

“Probably not, no,” he said. “Does it help that you’ve been to the dentist before? It still sucks the next time.”

Howell is currently 57th on the Official World Golf Ranking, with the top 50 after this week receiving invitations into the year’s first major. According to OWGR officials, he “likely” needs a finish of fourth place or better at this week’s Shell Houston Open in order to make that happen.

Opening with a 3-under 69 is certainly a step in the right direction.

That doesn’t mean trying not to think about it becomes any simpler.