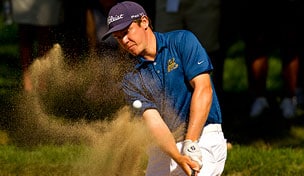 Editor’s note: Welcome to our new weekly Wednesday staple, The College Adviser, which will break down the top news and notes in college golf leading up to the NCAA Championship on May 28-June 2.

That 1994-95 Sun Devils women’s team is still the only squad to post a perfect season in college golf.

Their record is safe after the No. 1-ranked California men’s team finished third at this week’s Arizona Intercollegiate, snapping a streak of five consecutive victories to begin the season. Fifth-ranked New Mexico won the spring opener by two over TCU and three over Cal, despite the Golden Bears’ Joel Stalter and Michael Kim sharing medalist honors. (The other three Cal players finished 39th or worse.)

“It was definitely not our finest hour as a team,” Cal coach Steve Desimone said on the school’s website. “(Joel and Michael) both played great, obviously. But it was a little bittersweet.”

What else happened on campus this week?

• In case you missed it: Beau Hossler, the 17-year-old who briefly held the lead at last year’s U.S. Open, is already taking classes at Texas. He won’t begin College Golf 101 until the fall, however, after coach John Fields decided that he would sit his prized recruit in the spring. Read more about it here.

• Inspired by the play (and quick success) of former Illini Scott Langley and Luke Guthrie, reigning NCAA champion and Illinois junior Thomas Pieters announced last week that he will turn pro following the season. He was the 53rd-ranked player after the fall season, according to Golfstat. “My experience at Illinois has been awesome and I feel like I have had a very good college career,” Pieters said in a release, “but my dream has always been to become a professional golfer, and the time will be right after this season.”

• Kent State women’s coach Mike Morrow retired last week midway through his 15th season. He has led the Golden Flashes to a Mid-American Conference title in each of the past 14 seasons, dating to the program’s inception.