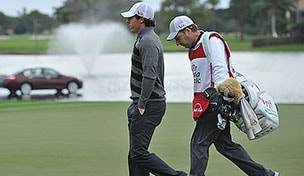 It’s Friday and players at this week’s PGA Tour stop haven’t been snowed on, which means we must have started the Florida swing. In honor of the circuit’s shift to the Sunshine State we shed some light on anchoring, an extreme makeover at the Honda Classic and Rory McIlroy’s missing “A” game.

Most improved. Judging PGA Tour events is always an inexact science. Some tournaments consider longevity the sign of success, while others use charitable contributions as the ultimate litmus test.

Depth of field, however, is the most realistic benchmark, which makes this week’s Honda Classic the Tour’s leading candidate for most-improved stop over the last decade.

Consider that before the event moved to PGA National and became associated with Jack Nicklaus and his South Florida charities, the 2006 and ’05 winners received 22 and 25 world ranking points, respectively. Since then the winners have averaged 49.6 points.

The world ranking math may not be perfect, but when it comes to the perfect storm in South Florida they seem to have it right.

Charles is in charge. Well, sort of.

Charles Howell III’s quest to play The Masters, a hometown event for the Augusta, Ga., native, has been gaining momentum since he began the season with three consecutive top-10 finishes, including a playoff loss at the Humana Challenge and a first-round victory over Tiger Woods at the WGC-Accenture Match Play Championship.

His steady climb has moved him from 119th to start the season to 64th in the world golf ranking. The top 50 in the world through the Shell Houston Open on March 31 earn invitations to the Masters and Howell could help his cause by maintaining his spot on the FedEx Cup points list (he is currently eighth) and earning a spot at next week’s no-cut WGC-Cadillac Championship.

“I know if I want to play in the Masters, I've got to play really good golf coming ahead,” Howell said. “Getting in next week would be a nice step to that, but it will still take a lot of good golf.”

Some rides down Magnolia Lane are tougher than others.

A time to talk. Maybe you didn’t like the message, and the timing was certainly suspect, but Tour commissioner Tim Finchem’s very public push back on Sunday toward the proposed ban on anchoring was very much pardonable politics.

If a press conference halfway through the championship match at one of the Tour’s marquee events doesn’t exactly qualify as “good timing,” consider the commish’s quandary.

If the player advisory council’s vote last week was any indication, the vast majority of Tour types oppose the ban. Whatever the majority’s motivation – self-preservation, growth of the game concerns, territorial gamesmanship with the U.S. Golf Association and Royal & Ancient Golf Club – it is Finchem’s job to be the voice of the Tour on this issue, which reached the end of its 90-day comment period on Thursday.

The USGA and R&A asked for comments and probably got more than they bargained for, but that’s neither Finchem nor the Tour’s fault.

Tweet of the week: @BubbaWatson “I am with @USGA. Anchoring loses essence of a golf swing. #MaybeIShouldTryAnchoringCauseICan’tPutt

Imperfect Poults. OK, second sucks – and third. We get it, but Ian Poulter seemed to press the wrong buttons last week on Twitter following his loss to Jason Day in Sunday’s consolation match at the WGC-Accenture Match Play Championship.

“I would love to have won this afternoon but (third or fourth place) just isn’t the same as playing for a title. When you’re playing over 100 holes in five days,” Poulter tweeted followed by another missive, “I will be honest that 3-4 place match is the least interesting match of the week. No need to play it. Players should be tied for third.”

For the record, there are $115,000 (the prize money) and 60 (FedEx Cup points) differences between third and fourth place at the WGC. It should also be noted that Day didn’t seem to have a problem with Sunday’s undercard.

The WGC’s consolation match certainly lacks the punch found in the finals, but isn’t there something to be said for competitive integrity? Last I checked they still play the NIT.

Missing McIlroy. Four and a half rounds into a season doesn’t exactly feel like the time for in-depth self-examination, yet as world No. 1 Rory McIlroy bolted PGA National on Friday he appeared in search of answers, for his wayward play and battered psyche as well as an aching tooth.

McIlroy told reporters he was “not in a good place mentally” when he walked off the golf course after eight holes at 7 over par for the day. He later released a statement that said he was struggling to concentrate because of a sore wisdom tooth.

However, many longtime observers say McIlroy’s pedestrian play – he now has a missed cut (Abu Dhabi), Day 1 loss (WGC-Match Play) and a withdrawal (Honda Classic) to start 2013 – is the byproduct of his wholesale switch to Nike Golf this offseason.

“Changing balls and clubs at the same time is the death knell. Can’t be done,” said one player manager.

McIlroy has earned the benefit of the doubt. If a good dentist is what the Ulsterman needs to right the ship, let Cut Line make a few recommendations. We’re just not sure the answers he seeks can be found in the dentist’s chair.