Cut Line: Top seeds gone, but all is not lost 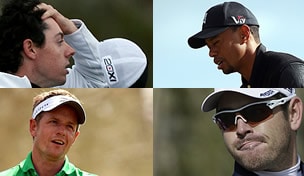 MARANA, Ariz. – The great WGC-blizzard of 2013 will be remembered for three things: a mass exodus of all four top-seeded players before the weekend, an empty void at least partially filled with a collection of feel-good stories and well, snow – nearly 4 inches of the white stuff – that turned this year’s WGC-Accenture Match Play into something that more resembled the Olympic downhill trials.

Seeing daylight from the DL. The Match Play is as good a litmus test for a player’s form as any in golf. Every match features Sunday-like pressure and the normal flow of Tour life is upended by the urgency of now.

It’s a simple truth and had everything to do with the Teflon smiles on Tim Clark and Jason Day’s faces Friday at Dove Mountain. Both players have endured their share of medical setbacks in recent years, so when both emerged from the second round it was reason to celebrate.

“This last (injury) was hard. To not hit a golf shot for almost a year is a long time,” said Clark, whose 2011 season was cut short because of elbow surgery.

Clark beat Adam Scott (2 and 1) and Thorbjorn Olesen (3 and 2) to advance to the Sweet 16, while Day – who was slowed last year by an ailing foot – cruised to victory in Round 1 with a 6-and-5 walkover of Zach Johnson and survived a 19-hole bout with Russell Henley on Friday.

You know what they say: Beware the mended golfer . . . or something like that.

One voice. While the PGA Tour remains mum on what the circuit’s official response will be to the U.S. Golf Association and Royal & Ancient’s proposed ban on anchoring, players who participated in Monday’s conference calls seem to be united in their distaste for the proposal.

Although one member of the Player Advisory Council said “everybody was against (the ban)” during Monday’s 35-minute conference call, another council member softened that stance but conceded those voicing opinions against the rule change were “more in the majority.”

After the PAC conference call, commissioner Tim Finchem conducted a second call with the Policy Board to formulate the circuit’s official response to the proposal, which is nearing the end of a 90-day comment period.

There has been no formal comment on the Tour’s stance, but the seeds of discontent seem to have taken hold among the play-for-pay set.

“I have said all along, take anchoring out of the equation, is this the best way to make rules for our sport? Should the PGA Tour make its own rules? No. Should the PGA Tour and the PGA of America and the USGA and R&A and journalists be involved? I think so,” said Paul Goydos, one of four player directors on the Policy Board. “I don’t think this is the way we should be writing rules for our sport.”

This isn’t about long putters anymore; it’s about the long view.

Seeing red. Any way you slice it, Tiger Woods’ Round 1 loss to Charles Howell III, just his third one-and-done week in 13 Match Plays, is reason to reassess; but the truth is, some early exits are unavoidable.

Consider that Woods was bogey-free and 2 under when Howell closed him out in darkness on the 17th hole Thursday – he missed four birdie attempts from inside 11 feet, hit 12 of 13 fairways and 14 of 17 greens, and simply ran into a hot hand, regardless of seedings.

“I played well, I really did, I hit a lot of good shots out there,” Woods said. “I didn’t make a bogey out there. Unfortunately, it’s the nature of the format, and I’m not advancing.”

Before we press the collective panic button know this: There’s nothing wrong with Woods that 72 holes of stroke play can’t fix.

Bracket busting. Blame it on the format, the world golf ranking or the snow, whatever the culprit, it doesn’t make a weekend marquee that is barren of a single top-seeded player any easier to stomach – not for Accenture executives, television types and certainly not for fans.

For the first time since 2002, the game’s alpha and omega, at least according to the world ranking arithmetic, were bounced in Round 1. On Friday, the remaining top dogs (Luke Donald and Louis Oosthuizen) joined world No. 1 Rory McIlroy and No. 2 Woods on the couch.

“It’s kind of the nature of the beast,” said Donald, who just made it past the turn in his 7-and-6 loss to Scott Piercy. “I think over 18 holes anyone has got a chance. I think maybe the No. 1 seeds or the higher seeds, maybe there's a little bit more expectation on their shoulders and the other guys have nothing to lose.”

Fair enough, but then why did it feel as if it was the Dove Mountain faithful who had been handed a 7-and-6 haymaker?

Let this end the debate to transform the Tour Championship into some sort of match-play event; it’s already quiet enough on the weekend at East Lake.

Quite Rors. Although three competitive rounds is hardly an adequate snapshot, it is safe to say that McIlroy’s transition to Nike Golf is officially off to a rocky start.

The Ulsterman has been here before and showed himself adept at slump busting (let last year’s historic romp at the PGA Championship forever put those doubts to bed), but nearly two months into 2013, McIlroy hasn’t come close to breaking par or seeing a weekend.

While McIlroy sounded upbeat about his long-term prospects even as he bolted property late Thursday following his loss to Shane Lowry in Round 1, the Swoosh-shaped elephant in the room was unavoidable.

There is little doubt McIlroy will play his way out of this mini-slide, but until he does the questions and pressure will only build.

But, as any Tour official within 200 miles of Tucson will tell you, golf is an outdoor game and the Match Play is hardly the only event that is at the mercy of Mother Nature.

For Dove Mountain, however, the weather woes are only part of the problem. Sparse attendance, a remote location some 20 miles from downtown Tucson and a genuine distaste for the Jack Nicklaus-designed course by more than a few Tour players add up to one inevitable truth – it’s time to leave the mountain.

According to tournament sources the Tour’s contract with Dove Mountain is up at the end of 2014 and Cut Line would humbly suggest a change of venue. You don’t have to go to South America, Tampa (which currently has a Tour event struggling to find a sponsor) or the Middle East, just go.