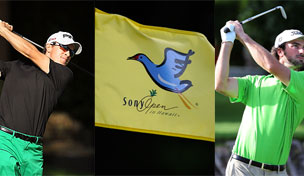 HONOLULU – There’s an old trick that college presidents have been using for years during freshman orientation. It’s less cautionary tale than scare tactic.

The Sony Open represents the first week at school for new PGA Tour professionals. If someone was to give a speech to each of the groups of three that will tee off in Thursday’s opening round, it would probably sound eerily familiar to one they’ve heard before.

It’s no secret that getting a PGA Tour card is only half the battle. Keeping one is the hard part. And it may be even harder this season.

With a one-year shortened schedule that ends with the Tour Championship, there will be an added emphasis on making the most of opportunities. No longer is there a Fall Series on which to fall back and the Mayakoba Golf Classic, once an opposite-field event, has been shuttled to the 2013-14 early season.

Meanwhile, the Sony Open remains an anomaly. Every single player who earned his playing privileges for this year through the Web.com Tour or Q-School was able to qualify for this event if he committed. That won’t be the case for much of the season, where fewer opportunities will mean more pressure to perform.

“It’s funny – you do get your card, but you’d better go play well or sit on your couch in July,” explained Scott Langley, who qualified through Q-School. “But thankfully, any events that I have this year are more than I had last year, so I’m happy for that. I hope to play well and move up the list and get into many more.'

“Obviously with the shortened schedule you’ve got to play well early,” Donald Constable added. “Being in my position where I just made it through Q-School, I need to play well early so I can get in the reshuffle and kind of climb up the ladder a little bit.”

Ah, yes. The reshuffle. Consider it the seedy underbelly of newfound PGA Tour privileges. At various points during the season, those playing from the Q-School and Web.com categories will be renumbered based on their FedEx Cup points standings.

This year, though, there will be more of a squeeze than ever. The reshuffle will take place after the eight West Coast tournaments. However, that includes the Hyundai Tournament of Champions (which obviously didn’t include any players from this category) and the WGC-Accenture Match Play Championship (which likely won’t – and if it does, they won’t need the reshuffle by that point anyway).

That leaves six events. After this week’s Sony Open is the Humana Challenge, which has expanded from a 144-player field to 156. In other words, everybody in the pool. If you’ve got a card and a pulse, you should be able to play. The Farmers Insurance Open will be a little tougher; same goes for the Waste Management Phoenix Open. After those comes the AT&T Pebble Beach National Pro-Am, another easy entry for most players, but it’s followed by the much more difficult Northern Trust Open.

And then? Well, young players had better have a decent enough standing going into that first reshuffle or it could be a long season almost before it really gets started.

“I think it’s important every season,” Andres Gonzales explained about his second tour of duty in the big leagues. “Everybody is going to have the same opportunities, but everybody wants to get up in the reshuffle in our category. But I’m fortunate enough to play in [the Sony]. A couple of years ago, I wasn’t able to get into this. But I’m in this, I’ll be able to play next week, so I have better opportunities to at least move up in the reshuffle.”

“Everybody says, ‘Learn to love the West Coast,'” said Web.com grad Robert Streb, “I’m just trying to play all I can get into right now. If the West Coast works out well, maybe I’ll figure it out after that.”

When it comes to scheduling, that word “maybe” is currently permeating many minds. For those trying to find PGA Tour success, the focus isn’t just on playing or even playing well, but playing well early.

If it doesn’t happen, well, you know what they say at orientation.