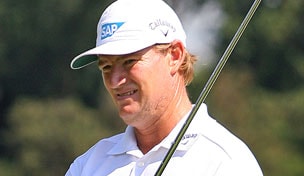 Getty Images
HILVERSUM, NETHERLANDS - SEPTEMBER 11: Matteo Manassero of Italy during the third round of The KLM Open Golf at The Hillversumsche Golf Club on September 11, 2010 in Hilversum, Netherlands. (Photo by Stuart Franklin/Getty Images)  -

DURBAN, South Africa – Thongchai Jaidee shot a 7-under 65 to take a three-stroke lead on the opening day of the Volvo Champions on Thursday.

Thongchai birdied six of his first 10 holes to end the day three shots ahead of two of South Africa's major winners, Ernie Els and Louis Oosthuizen.

Els, a two-time South African Open winner on the same Durban Country Club course, showed his fondness for the layout on the Indian Ocean shoreline with birdies on his first three holes. Then he double-bogeyed the fourth and finished with a 4-under 68. Oosthuizen finished out with three birdies in his 68.

Retief Goosen, who lost in a playoff a year ago, returned to competition after a five-month layoff following back surgery to shoot an even-par 72.