Els' love affair with Masters not over yet 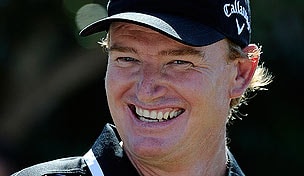 Ernie Els is tired of feeling like a jilted lover leaving the Masters.

He reveres Augusta National, relishes the championship and its traditions, but it has been unrequited love in the way that matters most to those chasing major titles.

This love story’s ending, though, isn’t written just yet.

After missing the Masters last year for the first time in nearly two decades, Els makes a highly anticipated return next week.

At 43, he returns with last summer’s British Open victory a reminder he shouldn’t be discounted even in a major that has wounded him more than any other.

Els returns for his 19th appearance in the Masters with a fresh perspective, thanks to a year away that might have been a blessing in disguise.

“I probably needed a year off, to be honest, because it was getting quite frustrating,” Els told GolfChannel.com. “Since '04, I just never really had the right mojo going in there. Even winning at Bay Hill in 2010, and winning in Miami just before that, and going in with a lot of form, something still was kind of missing.

“Not playing last year, and watching it on TV, especially with Louis Oosthuizen being in contention, seeing the guys playing the course, where they were hitting it, the pin placements and all of that, it almost brought me back to memories as a fan. I think it was a good thing I missed it, in how it has given me a kind of new, fresh start.”

Els is going to the Masters in search of his fifth major championship title with a different game plan this time. Mostly, he is going with a different attitude. He’s tired of trying too hard to get Augusta National’s cosmic gate keeper to allow him entry to the champions locker room.

“I’m definitely going to play the course and forget about even winning,” Els said. “I’m just going to go there without any pressure. I’m going to do things a little differently.

“I’ve played it so many times, you can’t trick me with that place anymore, but I definitely have a very different outlook than I used to have. I used to put so much pressure on myself, thinking `Maybe this is the year.’ I don’t want to deal with all that pressure. If it happens, it happens; if it doesn’t I’ve had a great run.” Els through the years: Click on picture for photo gallery

Els is planning to stop and smell the azaleas this time around. He hasn’t played the Masters Par 3 Contest in six or so years, but he plans to this year. His 14-year-old daughter, Samantha, has never caddied in the contest. She’ll get that chance next week.

While there may be unrequited love in Els’ quest to win, it isn’t that way with the people at Augusta National. Els has formed some strong bonds with members and staff there. He would be an enormously popular champion in the clubhouse and locker room if he breaks through.

Els was welcomed back warmly when he went to play a practice round there with Adam Scott three weeks ago.

“I saw the pro, the staff, the guys in the locker room, guys who have been there years and years,” Els said. “I think they missed me. We’ve become good friends.”

So much so that when Els was gutted watching Phil Mickelson take the green jacket with a birdie at the 72nd hole in 2004, he saw the disappointment in Augusta National staff as he packed up his gear in the locker room.

“They were probably as sad as I was, maybe not quite,” Els said.

Els made such formidable runs at the Masters between 2000 and ’04. He appeared to have one arm in the green jacket more than once. Twice he was runner-up while never finishing worse than T-6 in that span.

With his power, his towering iron shots, his terrific touch for a big man, Els seemed perfectly suited for Augusta National.

“If there was any major he was going to win, it was that one,” said Ricci Roberts, who caddied for Els in those runs. “He won two U.S. Opens, and that’s the major you least expected him to win.”

The ’04 loss to Mickelson, though, appeared to take something out of Els.

Roberts was with his player on the practice putting green when Mickelson’s final birdie that Sunday sealed their fate.

“When you heard the roar, it was like somebody reached into your chest and pulled your heart out,” Roberts said. “Ernie didn’t throw it away. He just got beat.”

In fact, Els played the final 12 holes in 6 under that day.

Finally, in 2010, he arrived as a favorite having won at Doral and Bay Hill leading into the Masters. That only set up another letdown. Els was never a factor at Augusta National and tied for 18th. The cumulative weight of the disappointments was evident when he shared his frustration with reporters there that year.

“It’s killing me,” Els said back then. “What can you do? I’m just beating my head against the wall every time.”

The words were disconcerting for folks rooting for Els to win there. There was such resignation in them, but that’s why Els’ failure to qualify for the Masters last year may have been the best thing for him. The year away gave him time to see how trying too hard, how loving that place too much, was hurting him.

There remains, however, some fatalistic perspective in his return, his wonder whether outcomes have never been completely in his hands and whether some cosmic force decides all these things.

“I think ’04 was maybe my time, and it didn’t quite happen,” Els said. “Augusta is that kind of place, where the dream and the story, it’s all almost written for some players. Maybe mine was there, and I didn’t quite take the opportunity. Who knows? If I never win the Masters, it will be disappointing. I’m obviously on the wrong end of it now. It’s a course and a place that has given me a lot of hope of winning it, but it is definitely bittersweet memories.”