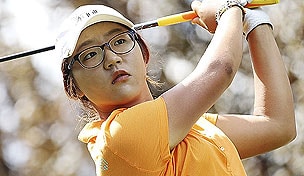 Apparently not only hard-core LPGA fans were paying attention to Lydia Ko this week in Australia.

Players on the range at Riviera were discussing the 15-year-old phenom, too.

“The players are all talking about,” said caddie and fellow New Zealander Steve Williams, according to a report by Ben Everill in the Sydney Morning Herald.

“She’s not flying under the radar but she’s still so composed. What she has done is truly hard to put in words.”

Ko shot a final-round 76 to finish solo third in Australia, but she has three pro titles in barely more than a year. The calls for her to turn pro now grow louder still.

Said Williams, according to the report, “I would think someone like Lydia could only help the LPGA and help grow their game and their name. There is no negative on going pro in my mind. There is nothing I can think of to suggest she shouldn’t play the LPGA tour. These days she could continue to study while playing – let’s face it, she already plays a schedule where she misses plenty of school.”

Fellow Kiwi Michael Campbell, the 2005 U.S. Open winner, isn’t so sure that playing for pay is the best option for Ko, at least not right now. According to a report by Fairfax Media, Campbell said he would advise Ko that there is “no need to rush” and would even relish the opportunity to chat with her about life as a tour pro.

“Now lots of people know about her, they’re all saying she should turn professional,” Campbell said, according to the report. “I don’t think she should necessarily listen to the opinions of people who don’t know anything about the inner workings of elite golf, particularly the psychology.

“She’s still very young, and clearly, what she is doing at the moment is working well. Whoever is looking after her seems to be doing a good job, and I think for the time being, she should carry on as she is. There’s no need to rush.”

But if Ko is again in contention at this week’s LPGA event in Thailand, the temptation of turning pro – and finally cashing a well-deserved paycheck – may be too hard to resist.