Ginella on Streamsong: Red or Blue? 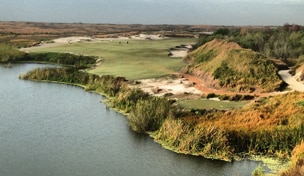 Blue or Red? That is The Question.

Streamsong, as you probably know by now, is a new golf resort in Polk County, Florida, which officially opened on Saturday, Jan. 26. I recently played the Blue, built by Tom Doak, and the Red, built by Bill Coore and Ben Crenshaw. (Easy way to keep them straight: Blue is a Doak and both have four letters.)

Based on a small sample set—one round on each—I prefer the Red.

The Blue was much more open off the tee, but the extreme greens were running fast, pins were cut into the peaks and valleys, and after the third three-putt, the second four-putt, and my playing partner’s five-putt at the 188-yard seventh, the Blue had a few of us seeing red.

Which brings me to the Red. It was slightly tighter off the tee, but also more visually interesting from the tee box and less undulating on the putting surfaces than the Blue. I was 10-shots better on the Red than Blue, and I remember more holes on the Red, which tends to be the case when you’re playing better and swinging less. Some of my favorite holes...

There aren’t enough short par 3s in modern golf, which is why I especially appreciated the Red’s 119-yard eighth: The signature hole at the Blue, maybe the most memorable par 6 on property, is the 188-yard seventh: Blue’s 293-yard 13th is well protected by this greenside dungeon of a bunker. First round at either course is $175 and replay rate is $90. It’s hard to imagine you’d go there and not play both, and harder to imagine how two minimalist architects on the same chunk of purified sand would be able to build two distinctly different 18s, but they did. Benefitting from being new and my respect for both design firms, both are included in My Top 40 Public Courses in the U.S.

The clubhouse, restaurant, bar and 12-room lodge with 16 beds is also open for business (rooms are $360 per night).

I stayed at the Terrace Hotel in Lakeland ($129 per night), which is 35 minutes from Streamsong. (I recommend Linksters if you’re looking for a local dive bar in the neighborhood). The 215-room hotel at Streamsong, which will include some spa amenities and fishing, opens in November.

As my group was teeing off on the Red’s 271-yard ninth, Tom Doak walked up. He wanted to speak to Rich Mack, executive vice president of Mosaic, which owns Streamsong. Mack was one of my playing partners and although Doak admitted a face-to-face of this nature was unlike him, he wanted to encourage ownership and management to keep the green speeds fair. The success of the Blue might depend on it.

As we got to the ninth green, Doak spoke up again. “This is my favorite hole on property.” He marveled at the contours cultivated by his counterparts and celebrated the short par 4.

I wasn’t only impressed with Doak’s candor. The overall quality of the dueling courses, and their proximity to my new home in Orlando, is good news for me and for golf in general. Amongst the masses back at the clubhouse, they seemed split down the middle. Half preferred Red; half preferred Blue. And that might be the best news yet.