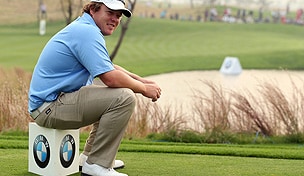 So modest were Coetzee’s expectations this week that he simply hoped to make the cut. After all, the South African had seen only nine holes at Innisbrook’s Copperhead Course, after curtailing his practice round Tuesday because of gusty winds.

Imagine his delight, then, as he finds himself in a share of the third-round lead at the Tampa Bay Championship. At 6-under 207, he is in a three-way tie with Kevin Streelman (65) and Justin Leonard (67).

“I must say today I really enjoyed it,” Coetzee said, “and tomorrow will be even better.”

The 26-year-old began his season with three consecutive top 10s on the European Tour, but has struggled in a pair of PGA Tour starts, getting bounced in the second round of the WGC-Match Play and finishing T-53 at Doral, where he closed with 80 and was thumped by 15 shots by playing competitor Rory McIlroy.

“Obviously it’s a new week and you never know what to expect,” he said.

Asked what a victory here would mean to him, Coetzee smiled and said, “A card. A PGA Tour card would be nice. I guess that’s the only thing I’ll be working on this year. … Obviously everybody wants to play where the money’s at, and at the moment, that’s the PGA Tour.”