Hawk's Nest: Fowler not ready to compete with Woods 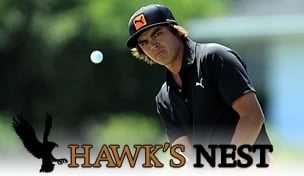 Seriously, I didn’t know who Upton was until last week. Then Arnie smooched her, and the gravity in golf’s universe took a 10-minute coffee break.

Anyway, Tom was a winner in Augusta National’s lottery for practice-round tickets. He and his wife, Christy, will be there on Masters Monday, which is just as cool as going to the actual tournament if you’ve never before been on the grounds. My advice? Go early, stay late, wear a comfortable pair of shoes and pinch yourself every 25 minutes or so.

“It might not be such a big deal if you live in the South, but if you live in Connecticut? I should be happy and I am,” Tom says. “Everybody I tell has the same reaction. They can’t believe it. Pretty amazing.”

Having gone to 18 Masters Tournaments, having spent several hundred hours perusing the property and watching the world’s finest golfers perform on the game’s greatest competitive stage, I’m prepared to file a lawsuit against Mother Nature if it rains on my friends. A golf writer can go back to the media center and eat Krispy Kremes if the weather turns lousy.

Tom paints houses for a living. Christy is a nurse in the delivery room at Yale-New Haven Hospital. Real people, even when they get real lucky, have no such options if their luck runs dry.

HE’S NOT BACK until he wins a 15th major title, if you ask me, but for all we’ve seen to this point in 2013, Tiger Woods will enter the Masters as an even-money favorite for the first time since 2008. That also happens to be the last time Woods won three times in the early season before heading to Augusta National. This time, however, the Tiger-or-the-field wager is absolutely legit.

The relationship between Woods and the oddsmakers has always been a bit warped. Guys who handicap NFL games don’t know pro golf nearly as well, and because a vast majority of the action at big tournaments would represent bets on the Dude in the Red Shirt, his price goes down to avoid massive payouts.

In other words, you really don’t get your money’s worth if you bet on Tiger. This spring is different for a couple of reasons. Woods has, for the most part, ridded himself of the “big miss” – the drive that sails 40 yards right, not the Hank Haney book—in ’13. Doral was a high point. Bay Hill wasn’t as good, but it wasn’t like Tiger spent most the week playing from difficult spots, which was the case at times in 2007 and ’08.

Secondly, and no less importantly, Woods’ putting is approaching the level of his “first prime,” when he demolished fields by playing from the fairway and making more 15-footers than anyone on earth. The completeness of his game is the most impressive aspect of his competitive existence right now, and though a player’s putter can abandon him without notice, Steve Stricker’s recent advice that Tiger “square up” over the ball is leading to very obvious results.

Woods has been a Tour pro for about 16 ½ years. During the first half of that stellar career, his putting cost him just two decent chances to win a major – at the 1999 U.S. Open and the 2003 British Open. Since 2005, the putter has plagued him almost every year at the Masters – 2010 stands out as a golden opportunity gone awry.

So it’s really no mystery why Woods hasn’t won the Masters since ’05. You can’t win that tournament by playing from the trees, and you definitely can’t win it if you’re always tapping in for par. As the best tournament in golf fast approaches, there’s no reason to believe Woods will be doing either this time around.

I DON’T OFFICIALLY keep track of the most popular subjects on the live chats I’ve been doing for a couple of years, but if I did, Rickie Fowler certainly would rank in the top 10. When I asked the several thousand in attendance to identify pro golf’s most overrated player in a poll last fall, Fowler won in a landslide.

Everybody has a comment or an opinion, and many of them come in the form of wisecracks. Personally, I know Fowler is a great kid. I’ve spoken with him directly a number of times – most notably on a “Morning Drive” appearance last spring – and his reputation as a nice guy is as indisputable as his talent.

Nice guys don’t always finish last, but this one doesn’t win very often, either, at least not yet. Any chance Fowler had of catching Woods in the final round at Bay Hill drowned in the form of two water balls at the 16th. He was two back at the time, so it was a good time for him to get aggressive, but the only thing most people will see is the triple-bogey 8 and another high finish for a 24-year-old hotshot with one PGA Tour victory in 90 career starts.

Time for a perspective check:

• Considering all the pre-Monday talk about the last time Fowler was paired with Woods in the final group of a final round – the kid shot a ghastly 84 last June at the Memorial – this was a step in the right direction. Not a big step, but progress, nonetheless.

• Considering that Fowler’s iron play is widely perceived as the strength of his game, his inability to hit solid irons Monday should be a cause for concern. Is it due to the pressure of being in the hunt? Of playing alongside Woods? Li’l Rickie’s body language in such instances doesn’t lead me to depict him as a player unglued, but the results speak for themselves. Fowler stops making birdies once he gets into contention late in the game.

• Considering all the attention Fowler has generated in his short time as a Tour pro, much of it because of his wardrobe, he is somewhat victimized by inflated standards. His clutch performance at the 2010 Ryder Cup, when he roared back from 4 down with four to play and halved his singles match against Edoardo Molinari, only amplified the expectations.

• Conclusion: Fowler is a good young player who could become very good in time, but when the pins are tucked on Sundays and the heat is turned up on those in the hunt, his biggest asset often dissolves into a glaring weakness. As one Tour pro told me years ago, “Most weeks out here, you can punch your way around the golf course for the first 36 holes. On the weekend, you have to become a boxer.”

Li’l Rickie may be only a welterweight, but he needs to learn how to box.

IT WAS JUST one swing, one strike of the ball on a day when Bill Haas would post a third-round 72 at Bay Hill. Not an atrocious score by any means, but enough to damage Haas’ position on the leaderboard and eventually send him reeling to a T-8 at the Arnold Palmer Invitational.

Some mistakes don’t hurt a player at all. Others prove pivotal in a man’s failure to win a golf tournament, however unnoticeable they might end up being, and Haas’ decision to hit a driver off the 10th tee Saturday afternoon was as costly as mental mistakes get. The shot would tumble through the left rough and trickle just beyond the out-of-bounds markers, leading to a double bogey he couldn’t afford.

Frankly, a driver at Bay Hill’s 10th makes no sense any time. The hole was playing at just under 400 yards – a gentle dogleg right with serious consequences if you miss it wide on either side. Midway into the third round, two shots off the lead held by Justin Rose, Haas’ competitive mindset should have been based on conservative instinct. All you want to do is stay close. No foolish errors. No strategic hiccups.

Among Woods’ many admirable traits is his ability to manage himself through a round, regardless of how he’s playing. He never hits too much club off the tee. And for all the days we’ve seen him hit it sideways, we never see him throw away strokes with his head.

When Woods does take on risk, it’s easy to understand why. A good example occurred in the final round of the 2003 Masters, when Tiger sensed a need to make up ground on the leaders and chose to hit a driver at the third, a short par 4. He blew it into the right trees, made a mess of the hole and never threatened, but there was sound reasoning behind the decision.

Given the time and place, Haas’ driver seemed like an illogical gamble. It’s not the sole reason he failed to win the tournament, but it does illustrate how course management can clearly separate good players from great ones.