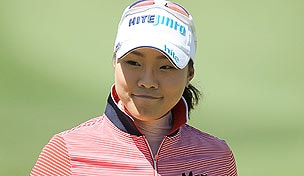 Seo took command of this championship on the back nine of the final round last year, seizing the lead with some brilliant ball striking, but she ultimately stumbled coming home, making bogeys over the final four holes.

With a 2-under-par 70 Friday, Seo begins the weekend five shots off the lead. She made six birdies in the second round and would have been even closer to the lead if not for missing a 4-foot chance for her seventh birdie at 18th hole. She isn't getting ahead of herself, though.

“It’s only the second round,” Seo said. “We saw last year you don’t know what will happen. I’ll just keep trying my best.”

Seo’s struggles closing out Kraft Nabisco a year ago were overshadowed by I.K. Kim’s stumble, the short miss at the 72nd hole that could have won her first major.

“I learned a lot,” Seo said of last year's finish. “I don’t have to think about results. I think that’s the big thing I learned.”

Seo was the LPGA’s Rookie of the Year in 2011. She gave herself a chance to win the U.S. Women’s Open at Colorado Golf Club that year. She led by two shots with two holes to go but lost the championship in a playoff with So Yeon Ryu.

Back in her native South Korea, Seo is known as “Super model of the fairways.” She confirmed Friday that she is recently engaged. The wedding date isn’t set yet. Her fiancé, by the way, isn’t a golfer. He works in a bank back in South Korea. Seo joked that she tried to teach him to play, but she grew frustrated.

“I tried a couple times, but we gave up playing together,” Seo said laughing. “I got angry trying to teach him when I didn’t see any improvement. He says he would rather watch than play.”