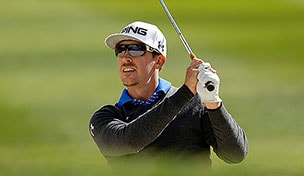 PEBBLE BEACH, Calif. – Hunter Mahan was bracing for the worst of Pebble Beach, his golf bag weighed down with rain gear and everything else to handle nasty weather.

Instead, he was reminded how much he loves this place.

It helps that Mahan drilled a 3-wood onto the 18th green for a two-putt birdie that gave him a 6-under 66 and a share of the lead to par with Russell Knox in the Pebble Beach National Pro-Am.

Better yet, the rain everyone was expecting early in the afternoon never showed up.

So when Mahan was asked about the most interesting part of the day, all he could think of was that it was boring – in a good way.

'I had a good time with my partner. The pace was great. The weather was good,' he said. 'I think the most interesting thing was we had perfect weather when it was supposed to rain at noon. We were all expecting rain. The bag probably weighs 100 pounds right now.'

Mahan took advantage of a gorgeous day by attacking Pebble Beach, the place to be when the conditions are calm. He missed only two greens – one of those on the edge – and had only one birdie attempt longer than 20 feet.

It was a good start, but nothing more. With three very different courses in the rotation, weather that can change without notice and one course with a different par, no one has a good idea where they stand until after three rounds on Saturday.

Knox, who grew up in northern Scotland and has family roots in California, made the most of his limited starts on the PGA Tour. He had a 6-under 64 on the Shore Course at Monterey Peninsula. Knox finished out of the top 125 on the money list last year as a rookie, so his opportunities will be limited this year.

'I came in here with a lot of confidence because I feel like I've been playing very well,' Knox said. 'Just haven't had the chance to play. It was nice to get off to a good start.'

The best round might have belonged to Seung-yul Noh of South Korea, who played at Spyglass Hill. It's typically the toughest of the three courses when conditions are benign, and such was the case on Thursday.

Pebble and Monterey Peninsula played nearly a half-shot under par, while Spyglass was almost a half-shot over par.

Noh reached 7 under until making bogeys on the last two holes for a 5-under 67, which only slightly soured his day. He still had the best score at Spyglass.

Even more impressive is that he felt half-asleep. Noh played in Dubai last week and is still coping with jet lag.

Also at 5 under were Scott Langley (65 at Monterey Peninsula) and Matt Every, who had a bogey on his final hole at Pebble Beach for a 67.

The day was not without a few adventures.

Former Secretary of State Condoleezza Rice, among the newest members at Augusta National, beaned a spectator on the sixth hole. Dustin Johnson, a two-time winner at the Pebble Beach National Pro-Am, had a four-putt on his way to a 3-over 73 at Monterey Peninsula. John Daly had a three-putt from 3 feet on the seventh hole and took four to get down from about 18 feet just off the ninth green. He had a 77.

Vijay Singh had a 72 at Pebble Beach, evidence that the PGA Tour still has not decided whether he will be suspended for using deer-antler spray, according to a Sports Illustrated report and later confirmed by Singh's statement last week in Phoenix. The spray is said to contain an insulin-like growth hormone on the Tour's list of banned substances. A decision is not expected this week.

'One of the things I've learned over the years here is you need to be patient,' Mickelson said. 'There's plenty of birdie holes throughout the three courses. Hopefully, I'll get a good run tomorrow and try to shoot myself up into contention.'

Lee Westwood made his debut in this tournament by playing with his father, and while he had a 68, he's not sure the score had any bearing on having a good time. Westwood was at Pebble Beach, and while it was a good start for him, he made up ground in the wrong places.

The scoring at Pebble comes on the opening seven holes. He played those in 1 under, missed three putts inside about 12 feet. Then, he picked up four birdies over his final 10 holes.

'But it was nice doing it all with Dad and being able to walk the fairways,' Westwood said. 'You sort of tick off bucket-list courses, and Pebble Beach would definitely be one of them. To actually play in a competition in the AT&T with your dad and tick that one off something really special.'

About the only thing Mahan doesn't like about this tournament is his memories, particularly two years ago. He made a furious rally on the back nine, twice was tied for the lead, and then reached the par-5 18th in two in the final round. But he three-putted for par, giving D.A. Points a cushion. Mahan was runner-up by two shots.

'It was disappointing to finish second in 2011, so I definitely want to win here,' he said. 'This is an historic tournament, so I think anyone that tees it up here knows the importance of it and knows that to be a champion, what this would mean. I'm excited to be in this position right now, but obviously there's a lot of work to do. I do look forward to this every year, and definitely want to win this tournament at some point in my career.'

DIVOTS: Heath Slocum made four eagles in 1,602 holes that he played on the PGA Tour last year. He made two in a 13-hole stretch on Thursday, hitting a 3-wood to 7 feet on the sixth hole at Pebble Beach and a 3-wood to 7 feet on the 18th hole. He opened with a 69. ... David Duval, making his first start of the year, opened with a 79 at Spyglass and later said on Twitter his knees were troubling him and he had a hard time walking the course. ... Geoff Ogilvy had a 73 at Spyglass. He needs to finish about fifth this week to qualify for the Match Play Championship, which he has won twice.