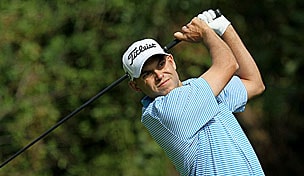 KAPALUA, Hawaii – Without reservation, I can say that the 30 men playing Kapalua this week are 'fair' weather golfers.

That is, they want their golf games to decide a Hyundai Tournament of Champions victor and not Mother Nature.

Sunday saw sustained winds of 25-35 mph and gusts up to 50 mph, causing balls to unfairly roll off greens and fall off tees.

After 71 minutes of play on Sunday, PGA Tour rules officials suspended play. An hour after that, officials decided to scrub play entirely and restart Round 1 on Monday.

'It's unfortunate because I think the fans back home are all calling us a bunch of wusses,' Bill Haas said. 'Well it's not our decision; it's the rules officials' decision and we are just doing what they say.'

'I think it's important to make sure the golf is fair,' Keegan Bradley said. 'You don't want to see somebody get an unlucky gust and the ball roll off the green or something like that.'

'You can't really even make a backswing or into the wind because it will knock you over,' Charlie Beljan said. 'Really just walking into this wind is a chore in itself.'