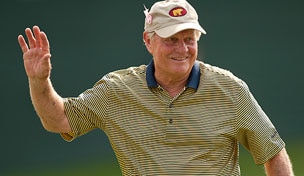 PALM BEACH GARDENS, Fla. – Jack Nicklaus has served as a mentor for Rory McIlroy in recent years, but that didn’t keep him from criticizing the player after McIlroy walked off the golf course midway through his second round at the Honda Classic.

“He shouldn’t have walked off the golf course; that was unfortunate,” Nicklaus said on Golf Channel’s spotlight coverage of the tournament Sunday. “If he had thought about it for five minutes, he wouldn’t have done it. I think he’s a good kid, a sharp kid. I think he’s probably just so frustrated with what’s happening with the way he’s played the last month or so that it just got to him.”

The 18-time major champion also contended that he doesn’t believe McIlroy’s move to Nike Golf equipment is part of his current problem on the course.

“It’s easy to blame it on your golf clubs, but frankly, I don’t really buy that,” explained Nicklaus, who designed the PGA National course. “You’ve just got to learn to deal with it. Not everything is perfect. His talent is so much greater and a much greater influence on his golf game than his clubs. He can play with anything.”

Nicklaus said he spoke with McIlroy on Monday prior to the event.

“I said, ‘Don’t worry about your golf clubs. You’re too talented. That will come around, just go play golf,’” he revealed. “I’m sure that Nike will work with him to get whatever he has to get. He’ll be fine. When the Masters rolls around, Rory McIlroy is going to be playing just fine.”