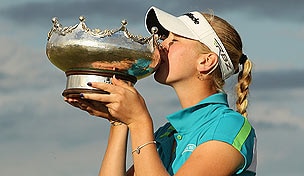 She is driven to make her first U.S. Solheim Cup team, and the ball marker appeared to help Sunday as Korda rolled in six birdie putts and an eagle while shooting 6-under-par 66 in a nice Sunday charge at the RR Donnelley LPGA Founders Cup. The finish bolsters her early position in the American Solheim Cup standings.

Korda, 20, was tied for fourth when she signed her scorecard Sunday. The points she would get with a T-4 finish solidifies her No. 8 position on the American points standings. While she won’t overtake Brittany Lang at No. 7, Korda moves closer. The top eight in points automatically qualify when the team is named at the conclusion of the Ricoh Women's British Open this summer. The other two automatic spots go to the two highest ranked Americans in the Rolex world rankings who aren't already on the team.

“It’s a huge goal,” Korda said. “I went in to this year thinking I want to be on the team and guarantee a spot on the team.”