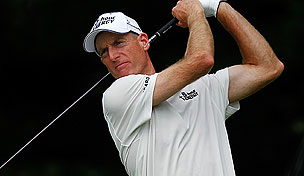 SAN ANTONIO – Jim Furyk appears to be taking a page out of Phil Mickelson’s playbook, experimenting with two drivers in the bag this week in preparation for the Masters.

“At my length, there are a few holes that pose an issue for me at Augusta,” Furyk said Thursday at the Valero Texas Open, where he opened with a 3-under 69 to sit two shots off the lead. “There are a few drives that have always been a thorn in my side at that course, and in the back of my mind I’ve always been trying to figure out a way.”

The experiment didn’t go well in the opening round here, however.

Furyk used the 9.5-degree driver only once and “hit it awful.” (It went left.) Because he also has been struggling on the range with the club, Furyk said he likely will use only one big stick Friday, “retool” the 9.5 degree on the range and reevaluate. At the very least, he said, he will have two drivers in the bag when he plays practice rounds next week at Augusta.

“Right now, I’m not sure that I’m flying it that much further,” Furyk said. “But when the 9.5 hits, it’s got a lot more chase. The goal would be, if I could carry it farther, that would be good for Augusta.”

The holes that Furyk could potentially use the 9.5-degree driver, conditions permitting:

• 3, to cover the bunkers if the hole location is in the back

• 9, to give him more chase down the hill

• 14, to possibly get over the hill in the fairway (depending on conditions)

And, most notably, the par-4 17th, his annual nemesis.

“I hit that (Eisenhower) tree at least twice every year,” Furyk said. “Right now I want to find something that I can airmail that thing with.”

Unlike Mickelson, who used a fade and draw driver at Augusta in both 2006 and ’11, Furyk is simply trying to find a longer driver without sacrificing accuracy.

To make room for the extra club, Furyk subbed out his pitching and gap wedges and implemented a “weaker” pitching wedge – 48 degrees. Now, he has 48-, 55- and 60-degree wedges.

Asked if he was concerned about playing Augusta with only three wedges, not his usual four, Furyk laughed.

“The course is so damn long, the only places I have to worry about hitting a wedge is basically the par 5s, and I can lay up to wherever I want in that case,” he said. “There are no wedges out there for me. They sit there and I never hit the damn things.”