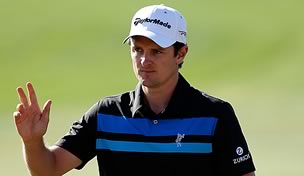 While the season got off to a rocky start for Nos. 1 and 2 in the world ranking, the fifth-ranked player in the world continued to have no problems at Abu Dhabi Golf Club.

Justin Rose carded four birdies against only one bogey Friday, firing a 3-under 69 that gave him the lead after 36 holes at the Abu Dhabi HSBC Golf Championship. At 8-under 136, the Englishman leads by one shot over Gonzalo Fernandez-Castano, Thorbjorn Olesen and first round co-leader Jamie Donaldson.

'There's a difference in how I feel about my game and how I trust my game, absolutely,' said Rose, who held a share of the lead after an opening 67 Thursday. 'I believe that any tournament I tee up in, I can win.'

Having ascended inside the top five in the world ranking for the first time in his career last September, Rose enters the 2013 season with lofty expectations. Through two rounds, he finds himself atop the leaderboard during an event that quickly became more about who missed the cut than who was leading it.

Playing together for the first time as Nike brethren, both Tiger Woods and Rory McIlroy continued to struggle Friday and will sit out the weekend. Woods endured a two-stroke penalty on the par-4 fifth hole to knock him out of competition, while McIlroy was unable to get anything going during the second round despite a change back to his old Scotty Cameron putter. The Ulsterman manufactured only two birdies en route to a 3-over 75 for the second consecutive day, and at 6-over 150 missed the halfway cut by four shots.

Like McIlroy, Woods was left to analyze where things went awry after missing the cut in a European Tour event for the first time in his career.

'I didn't hit it particularly well. I putted great but just didn't hit it very good,' said the 14-time major champion. 'I have some work to do.'

While Woods and McIlroy both showed signs of rust, other players will enter the weekend in position to begin the year with a high finish. Playing alongside the high-profile pair, Martin Kaymer - who won this event three times from 2008-11 - carded a 3-under 69 and will begin the third round tied for ninth at 4 under, four shots behind Rose. He is joined on that number by Jason Dufner, whose steady play has led to only two bogeys through 36 holes, and former U.S. Open champion Michael Campbell.

Defending champion Robert Rock, who held off final-round charges from both Woods and McIlroy to claim the title a year ago, withdrew during the second round due to illness after carding a 4-over 76 on Thursday.