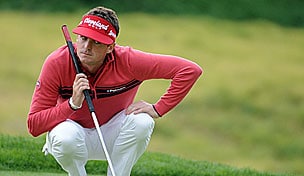 MARANA, Ariz. – Bruce Lietzke would have noticed a banana inside the cover of his long putter.

One of the famous stories about Lietzke, a 13-time winner on the PGA Tour, is that he never touched a club when he wasn't on Tour. His caddie didn't believe him, so at the end of the 1984 season, he put a banana inside the head cover of Lietzke's driver before zipping up the travel bag. Some 15 weeks later at the Bob Hope Classic, the caddie excitedly unzipped the travel bag.

The stench should have been the first clue.

''Sure enough, he pulled off that head cover and the banana ... it was not yellow,'' Lietzke said Monday. ''It was black, nasty, fungus. He said he'd never doubt me again.''

Lietzke confessed to breaking his own rules when it came to the broom-handled putter that he picked up at the Phoenix Open in 1991 and used the rest of his career. Even in his down time, he would tinker with the length of the putter and practice with it. And he wonders what the conversation would have been like today if that 1991 PGA Championship had turned out differently.

Lietzke was the runner-up at Crooked Stick behind a big-hitting rookie named John Daly. Imagine if Lietzke had won that major.

Would the USGA have banned the putter he anchored against his chest?

''I think so,'' Lietzke said. ''Judging by their reaction to major successes, I guess they were just waiting for this to happen. The USGA should have made a statement then. If I had won the PGA Championship, they might have tried to outlaw it. And if you look back on it, most people would have gone along with it.''

That was one of the arguments PGA Tour commissioner Tim Finchem put forth Sunday when he said the Tour was against the proposed rule that would ban the anchored stroke primarily used for long putters and belly putters.

Without any empirical evidence that an anchored stroke is easier, why ban it?

And after all these years, why now?

The faces in this discussion – and that's all it is right now – are Keegan Bradley and Tim Clark, for vastly different reasons.

It was Bradley's win at the PGA Championship that prompted serious talk about the future of anchored strokes. Bradley now is lumped in with three of the last five major champions using a belly putter, but he was the catalyst.

European Tour chief executive George O'Grady said the conversations between golf's administrators and the governing bodies about the future of the long putters began last year at The Masters.

That was before Webb Simpson won the U.S. Open and Ernie Els won the British Open, which ramped up the attention.

It was his dignified speech at Torrey Pines that led even the staunch opponents of long putters to look at them differently. More than one person in the room that night has described his presentation as a game-changer.

That much was reflected in the overwhelming support from the Player Advisory Council and player-directors on the tour's policy board that the PGA Tour should oppose the USGA on this rule.

The tricky part is figuring out where this will lead.

The PGA Tour sent the USGA a letter last week spelling out its opposition to Rule 14-1(b), and the PGA of America and its 27,000 club pros are also against the ban.

One reason Finchem decided to speak about the letter – a small distraction during the final of the Match Play Championship – was his concern that the discussion was being portrayed as a showdown. Right now, it's a matter of opinion.

If it becomes a showdown, high noon is not until the USGA and R&A decide whether to go ahead with the rule. And that decision won't come until the spring.

It's a polarizing topic. If not, the governing bodies would not have offered a 90-day comment period that ends on Thursday. They simply would have announced a new rule and been done with it.

For now, the Tour has not said it will go against the USGA. It has only said it disagrees with the USGA.

Finchem chose not to show his hand when he brushed off questions about whether the Tour would ever allow an anchored stroke even if the governing bodies adopt a rule that bans it starting in 2016.

But he has made it clear on at least three occasions that while slightly different rules could work for the PGA Tour, this rule would not be one of them.

This is not where golf needs to go. The buzz word coming out of the USGA annual meeting earlier this month was not ''bifurcation'' but ''unification.''

Go anywhere in the world and golf effectively is played by the same set of rules. This is something that should never change.

The USGA and R&A know they don't have evidence to show that using an anchored stroke is easier. Frankly, they don't need any evidence. This is not about equipment, rather a new rule that attempts to define the golf stroke as the club swinging freely.

The mistake by the USGA was waiting until someone won a major before acting – or believing that winning a major should even make a difference.

The majors are the biggest events to win. They define careers. But if the belly putter was an issue when Simpson won the U.S. Open, why wasn't it an issue when he won the Deutsche Bank Championship? Did the putter work differently at Olympic?

Lietzke can think of several occasions when nerves made him miss with his long putter. And if the belly putter is the cure, don't just look at Ernie Els kissing that claret jug last summer at Royal Lytham & St. Annes. Look at those two putts Els badly missed on the last few holes of the Match Play Championship to lose in the opening round.

If the USGA decides that a ban on anchored strokes is best for the game, the PGA Tour should go along with it.