Choi poised for another good finish at Innisbrook 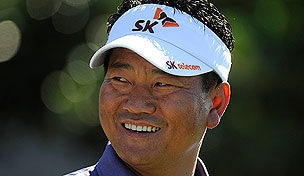 PALM HARBOR, Fla. – Already the top money earner at the Tampa Bay Championship, K.J. Choi appears poised to add to that total – and maybe even capture his third title at Innisbrook’s Copperhead Course.

Choi made a clutch par save on the 17th hole Friday to preserve a 4-under 67 and put the South Korean into the penultimate group here. At 6-under 136, he is only one shot behind PGA Tour rookie Shawn Stefani.

Why has he been so successful here?

Choi says it’s because he can play a low cut off the tee and steer clear of any trouble. He has missed only seven fairways this week, though his 264.8-yard average off the tee puts him near the bottom in that category.

“It’s a really good driving course for him,” said Choi’s caddie, Graeme Courts, who has been on the bag since last July. “He can play that low cut on a lot of the tee shots here. It’s always nice for him to go back to a course that he has played well.”

Choi also switched to the claw grip at Riviera, hoping to improve his eyeline on right-to-left putts. Since the move, he has tied for 33rd at the Northern Trust, reached the second round of the WGC-Match Play and tied for 57th last week in Puerto Rico.