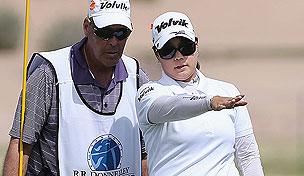 PHOENIX – Jee Young Lee birdied three of the last four holes to take a one-stroke lead over Ai Miyazato on another hot day at the LPGA Founders Cup.

Lee, the 27-year-old South Korean player who won the LPGA Tour's 2005 South Korean event before becoming a tour member, had a bogey-free 8-under 64 on Friday to reach 15-under 129. She broke the tournament 36-hole record of 12 under set by Angela Stanford in 2011 in the inaugural event.

''I've waited so long, like seven, eight years,'' Lee said. ''I really want to win this week. But two days more, two days left, so I'm going to try to keep being more confident and patient.''

She played in the morning wave before the temperature climbed into the low 90s on Desert Ridge's cactus-lined Wildfire layout.

''My driver was good,'' Lee said. ''My tee shots keep in the fairway, and then my irons are pretty good, better than yesterday, and my putting works a little bit more.''

Miyazato bogeyed her final hole for a 67 a day after shooting a tournament-record 63. The Japanese star is playing her first event since sustaining a whiplash injury three weeks ago in a five-vehicle crash in Thailand.

''I'm very happy with my round,'' Miyazato said. ''I made eight birdies out there. I had three bogeys, but still a lot of birdies, so it just feels good. ... I kept hitting the fairways and I kept hitting to the green, and I had 29 putts, which is like my green regulation.''

Third-ranked Stacy Lewis, coming off a victory two weeks ago in Singapore, was four strokes back in third after a 65. She holed out from 109 yards for eagle on the par-4 16th – her seventh hole of the day – and played the her back nine in 4 under with five birdies and a bogey.

''I just really didn't have any birdie putts the first few holes and then just hit a shot on 16 that was perfect,'' Lewis said. ''From there, I made about an 8-footer for par on one and I think that really kept the momentum going and I hit some good shots on the back nine and made putts.''

Lewis has a chance to take the top spot in the world from Yani Tseng with a victory.

''If I ever get to No 1, I'm going to enjoy it because I never as a kid dreamed of being in that position,'' Lewis said. ''It's definitely on my mind.''

Tseng, the defending champion, was 2 under after a 72. She entered the week with a 22-event, 50-week winless streak, while Lewis has won five times in her last 22 tournaments.

''I think Yani's put a lot of pressure on herself,'' Lewis said. ''I think she's kind of taken the expectations up another level and I definitely think the state she's at right now with her game, I think if she did lose it, I think she would start to play better.''

Lewis and Tseng played alongside Paula Creamer in the first two rounds. Creamer, also shaken up in the car accident on the way to the Bangkok airport, was 5 under after a 70.

Second-ranked Na Yeon Choi, also with a chance to move up to No. 1 with a victory, was 3 under after a 72.

Michelle Wie missed the cut with rounds of 74 and 72. She also missed the cut in Australia, finished 45th in Thailand and tied for 45th in Singapore – both no-cut events. In 12 rounds this year, Wie – using an awkward hunched-over putting stance – has broken 70 only once, closing with a 69 in Singapore after a third-round 77.

Suzann Petterssen also missed the cut, shooting 73-71. The Norwegian player, ranked No. 7 in the world, was coming off a victory Sunday in China in a Ladies European Tour event.

DIVOTS: Kim Welch had a hole-in-one of the 163-yard 14th, using a 6-iron. She missed the cut by a stroke with rounds of 71 and 72. It was the third ace of the week. On Thursday, Jennifer Gleason also had one on the 14th, and Meena Lee holed out on the sixth. Jane Rah had a rare double-eagle 2 on No. 15 in the first round, holing a 3-wood shot from 226 yards. It was the 32nd albatross in tour history. ... Jaclyn Sweeney also missed the cut, shooting 71 and 72. She earned a spot in the field last month with a victory in the Symetra Tour's season-opening VisitMesa.com Gateway Classic.