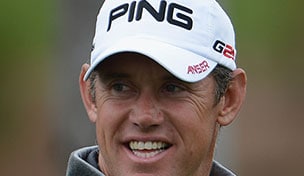 The tee sheets at the Honda Classic might identify him as being from Worksop, England, but when he stepped to the 17th tee in the Bear Trap late Saturday afternoon he was boisterously welcomed as a Yank.

He was introduced there as Palm Beach Gardens’ own Lee Westwood.

“A bigger cheer goes up than when it’s Worksop, that’s for sure,” Westwood said.

Westwood is making himself at home more quickly than anyone back in England could have imagined. Just five days ago, he moved his family into their new 15,000-square-foot mansion at Old Palm Golf Club just down the road from PGA National’s Champion Course. He moved into position to win his new hometown event with an even-par 70 Saturday in windy, trying conditions.

At 6-under-par 204, Westwood is just two shots behind the co-leaders, Luke Guthrie and Michael Thompson.

“I’ve got 40 career wins and only two in the United States,” Westwood said. “So, I need to try to change that.”

That was one of Westwood’s motivations in moving to the United States. He has 22 European Tour titles, 17 other professional titles around the world, but his only PGA Tour titles came at the Freeport McDermott Classic in ’98 and at the St. Jude Classic in 2010.

Mostly, Westwood wants to win his first major championship, and three of the four majors are played in the United States. With his 40th birthday looming this year (April 24), Westwood made the major commitment to move his wife, Laurae, and their two children to South Florida.

While Westwood worried how his 11-year-old son and 8-year-old daughter would take the news, he was pleasantly surprised by their reaction.

“Do you want to go and live by the sea and the sun by a beach?” Westwood asked them.

Fourteen builders are still putting the finishing touches on Westwood’s mansion. His new home is just a mile from PGA National. Westwood has been driving his children to school this week.

“It’s nice to go home and sleep in your own bed, and sort of do the things you normally do,” Westwood said. “I’ve never had a chance to do that before because there has never been a tournament so close to my home in England.”

Westwood sold his home back in Worksop. He believed moving to the United States would help him win the big events he wants to win.

“I’ve been looking to move for a couple of years, just getting frustrated with the weather and winters in England, not being able to work as hard as I would like, really feeling too rusty,” Westwood said. “I wanted to come and live in the sunshine.”

“He sounds like he loves it here,” said Mike Kerr, Westwood’s caddie.

Westwood is considered one of the game’s best ball strikers, and he showed it, navigating his way around that difficult back nine at PGA National in Saturday’s blustery conditions. His even-par round felt better with just eight players breaking par in the third round.

Basically, Westwood fought his way back from a rough front nine. With back-to-back bogeys at the eighth and ninth, Westwood dropped back in the chase. He got himself into a tie for third with birdies at the 14th and 17th holes on a bogey-free back nine.

“It was a strong performance,” Kerr said. “He handled the wind and hit some very good shots.”

Westwood closed his round with a good par save at the last. Trying to reach the par-5 closing hole in two, he blew his shot over the right edge of the green and into the water. He was able to take a greenside drop and got up and down.

“I normally get a bit of stick for not having a short game, but I’ve chipped in twice this week and had a lot of sand saves and a lot of scrambling, like you need to do around this golf course. Maybe I'm turning that around.”

Westwood is hoping to turn around his record in the United States with a victory and build some momentum on the way to The Masters in six weeks.