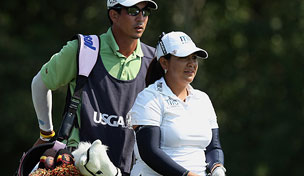 PHOENIX – As an LPGA rookie last fall, Lizette Salas took a chance on another rookie.

Salas trusted Greg Puga to be her caddie even though he had never toted a bag on any tour before.

They are proving a terrific combination as Salas makes a run up the Rolex Women’s World Rankings and U.S. Solheim Cup standings.

Puga may not have much experience as a tour caddy, but he’s a familiar name in men’s golf. He won the U.S. Mid-Amateur in 2000 and played in the Masters in 2001.

Puga was teaching as a pro at Azusa Greens Golf Course and got to know Salas and her father, Ramon, who worked there. Salas started playing there when she was 7.

“I remember her taking up golf, and like three years later, she’s a scratch golfer,” Puga said. “It was crazy.”

Salas has yet to win her first LPGA event, but she keeps popping up on leaderboards. She’s on another this week at the RR Donnelley LPGA Founders Cup as she heads into the final round tied for fourth. Her strong finishes as a rookie and early into her second season has helped her climb to where she is now the 10th ranked American in the world. She would play on the U.S. Solheim Cup team if the event were played today.