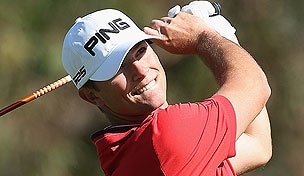 In his first event since graduating from the Web.com Tour, Guthrie found himself paired with friends and fellow rookies Russell Henley and Scott Langley during the first two rounds of the Sony Open earlier this year.

While Guthrie missed the cut, Henley won the tournament and Langley remained on the leaderboard throughout the weekend.

This week, he’s getting his chance to shine in the spotlight.

Guthrie followed an opening-round 68 with a 7-under 63 at the Honda Classic on Friday, claiming the lead in the process.

“The rookies coming out, believe that we can compete right now and win right now,” said the University of Illinois product. “With their performance coming right out of the gate, it just proved it in the first tournament. So obviously gives all of us a little more confidence coming out here and competing against them.”

Starting on the back nine, Guthrie posted three birdies to make the turn in 32, then tallied four more on the front side at PGA National to post the lowest score of his young PGA Tour career.

He credits working with Illinois coach Mike Small during his recent off week with helping propel him up the leaderboard here.

“He kind of helped me with my putting and my grip was getting really weak and just kind of cleaned a few things up,” Guthrie explained. “He asked me how I was going and I said this is the best offense I've had on a golf course in a while. Even though I shot 2 [under], I was really hitting good, crisp shots, firing at flags, and I felt like I could have shot 5 under yesterday pretty quickly. I was pretty excited to get back out here and kept it rolling.”