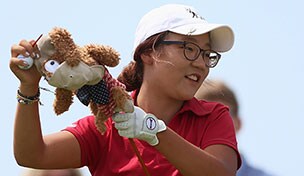 Move over No. 1 Yani Tseng.

Lydia Ko will bring a major buzz with her when she joins Tseng and Lewis in the spotlight at next week’s LPGA season opener at the ISPS Handa Australian Women’s Open.

Ko, the 15-year-old amateur sensation, held off all challengers to win the ISPS Handa New Zealand Women’s Open Sunday for her third professional title in 53 weeks. Ko is playing the LPGA’s first event of 2013 on a sponsor’s exemption next week at Royal Canberra Golf Club in Yarralumla, Australia.

''It was a pretty good day out there and I'm pretty excited to have my name on this trophy,'' said Ko. ''I didn't cry at the Canadian (Women's) Open so I've got no idea why I cried here, I guess it meant more.

''It's our national open so to win it means a lot. I'm not the sort of person who shows expression or feelings that much but I guess I did here.''

With her victory Sunday, Ko became the youngest winner in Ladies European Tour history at 15 years and 9 months old, eclipsing the mark previously held by Amy Yang, who was 16 when she won the ANZ Ladies Masters in 2006.

In a whirlwind 2012 season, Ko shook the women’s golf world:

• On Jan. 29, she won the Australian Ladies Professional Golf Tour’s New South Wales Open. Ko was 14 then. At the time, that made her the youngest male or female winner of a professional event.

• On Aug. 26, she won the CN Canadian Women’s Open, surpassing Lexi Thompson as the youngest winner of an LPGA event. Ko was the first amateur in 43 years to win an LPGA title.

Ko, who was born in South Korea but moved to New Zealand when she was 6, beat a star-studded field when she won the CN Canadian Women’s Open last year. She never faltered under pressure on that Sunday in Canada with Stacy Lewis playing alongside her. Lewis started the final round a shot behind Ko but ended up six back.

“I was most impressed with just her demeanor,” Lewis said at the time. “You would never have known that it was the final round of an LPGA event. She played like she had been there before.”

Ko fired a final-round 68 and finished at 10-under 206 for the three-round tournament at Clearwater Golf Club. Amelia Lewis finished with a 6-under 66 for a 207 for the tournament, which is co-sanctioned by the European (LET) and Australasian women's tours.

Cheyenne Woods, the niece of Tiger Woods, finished in a tie for 25th at 3 under while former world No. 1 Laura Davies was 51st.

At No. 38 in the Rolex Women’s World Rankings heading into the week, Ko will move up when the newest rankings come out Monday.

-Information from The Associated Press was used in this report.