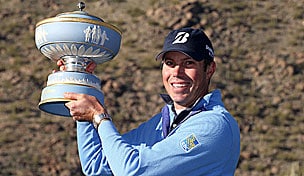 MARANA, Ariz. – It was strangely apropos that on the same day the PGA Tour officially pushed back on the proposed ban on anchoring some wondered if the “Kooch” style of putting should be considered nonconforming, the byproduct of namesake Matt Kuchar’s workmanlike effort atop Dove Mountain this week.

Not that a ban on the “Kooch,” which features a longer putter shaft with the handle buried into the left forearm, would make much of a difference according to Kuchar’s longtime putting coach Dave Stockton Sr.

“I wanted him to put the butt of the club in his wrist and it just kept going up and up (his forearm),” Stockton said last month. “Either way he’s a great putter.”

Through five wild wintery days in the Arizona highlands Kuchar was the best of a bunch that included the better part of the world’s top 64 players, rolling through the delayed early rounds at the WGC-Accenture Match Play Championship and weathering the weather and a relentless rally by Hunter Mahan in Sunday’s title bout to collect his first WGC salad bowl.

Consider Kuchar’s line for the week at the WGC-Snowball Fight features putting totals of 28, 28, 22, 24, 25 and 20. While that includes the normal number of conceded offerings and shortened rounds it could get U.S. Golf Association types reconsidering their decision to make the “Kooch” stroke legal under the proposed ban.

A week sent sideways by nearly 4 inches of snow on Wednesday, multiple frost and freeze-related delays and gusts on Sunday that reached 30 mph was made whole by the circuit’s ultimate meat-and-potatos guy.

For the week Kuchar smiled his way to six victories, trailed a total of three holes and never reached the 18th tee in competition.

“Match play I find to be such an amazing, unique format, so much fun to play and so much pressure,” said Kuchar, who has advanced to the final four the last three years at the Match Play and improved to 15-3 at the event. “It seems like each hole there's so much momentum riding and so much pressure.”

Even Kuchar’s 2-and-1 victory over Mahan wasn’t as close as the line would suggest. Through nine holes Kuchar was 4 up, the byproduct of Mahan’s 4-over outward effort as much as Kuchar’s steady start, but he cut short the comeback with a 7-footer to trade birdies with Mahan at the 12th and a 10-footer for birdie at the short par-4 15th hole, both times to remain 2 up.

“He’s more of like a fuzzier Peter Jacobsen kind of guy who likes to talk,” said Mahan, the defending champion whose run of holes without trailing at the Match Play ended at a staggering 166 frames on Sunday. “It's just fun to be around him. And the way he plays, it's going to make you play your best as well.”

And while that unorthodox putting style may be what propelled Kuchar to victory, the ubiquitous smile, a stout pair of winter gloves and three sets of chemical hand warmers were the why.

“Those gloves were the MVP today,” smiled Kuchar’s caddie Lance Bennett, who loaned his boss the gloves for Sunday’s shootout. “He’s really good at managing his ball in tough conditions. He never lets anything faze him. He never has a bad attitude.”

It was easy to go negative at Dove Mountain, particularly as the temperature dropped and the delays mounted.

From snow to sunscreen to windswept, the 2013 Match Play endured three of four seasons and four untimely exits by each of the top four seeded players.

In order the Match Play doled out capricious body blows to the marquee that had nothing to do with Mother Nature. First Tiger Woods was sent packing in Round 1 for the third time in 13 years, a 2-and-1 sleeper to Charles Howell III; followed by world No. 1 Rory McIlroy’s one-and-done loss to Shane Lowry (Note to all other tournament organizers: if you want to Tiger-proof your tournament switch to match play; he is now 3-for-13 at the WGC).

Friday was no more predictable with world No. 3 Luke Donald and the last remaining top-seeded player Louis Oosthuizen getting bounced by Scott Piercy and Robert Garrigus, respectively.

No. 10 Bubba Watson was the last remaining top-10 player who made it to the weekend. That’s not a WGC, that’s the Tampa Bay Championship, which many suggest should be the new home for the Match Play which has suffered snow delays twice in the last three years and annually struggles at the gate.

By the time Sunday’s gale blew away those metaphorical clouds, however, few could argue the merit of the last men standing.

Following a 36-hole Saturday (Note to Match Play officials: doubling up on Saturday worked well, bringing Wednesday’s start into question) Kuchar handed Jason Day, who won the bridesmaid match over Ian Poulter, his only loss of the week, 4 and 3, and added to a resume that now includes a Players Championship (2012) and a WGC.

It’s a reality that casts Kuchar into an altogether new spotlight that has nothing to do with his putting style. Transformed by swing coach Chris O'Connell following a fall from competitive grace in the mid-2000s, Kuchar’s status as arguably the best player without a major championship is as sound as that evergreen smile.

Following the snow that briefly delayed the final match in 2011, Kuchar’s children have returned to Dove Mountain each year awaiting a similar white-out despite assurances from Dad, “It’s Tucson, it’s not going to snow.”

It turns out the only thing more predictable than snow at Dove Mountain is Kuchar.