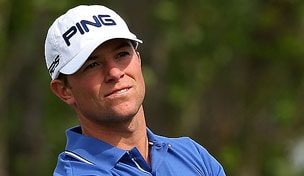 PALM BEACH GARDENS, Fla. – It’s a credit to Luke Guthrie and Michael Thompson that the two young players with zero PGA Tour victories between them entered Saturday’s third round of the Honda Classic in the final twosome and finished it by holding serve.

Guthrie (1-over 71) and Thompson (70) are each at 8 under, two strokes ahead of the next closest competitor going into the final round.

“I was pretty confident I could do that,” said Guthrie, a rookie on Tour. “Last year at the Web.com, I played some solid golf.  I always believed I could play well. I didn't know how I would handle six tournaments in a row. I haven't played this much golf before, but last year kind of confirmed that; that I can play long stretches and consistently. Yeah, I was very confident I could get out here and compete right away.”

“[I’ve] just played really smart golf and you know, try to continue to do it tomorrow and hopefully I can hit the ball a little bit better tomorrow,” Thompson said. “I'm excited to have another opportunity to play in the final group.”

Guthrie and Thompson will tee off at 1:30 p.m. ET, just behind the twosome of Lee Westwood and Geoff Ogilvy.