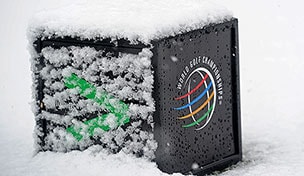 MARANA, Ariz. – With most of the snow shoveled away and greens finally thawed, play resumed at the WGC-Accenture Match Play Championship at 3 p.m. ET Thursday, bringing an end to more than 24 hours of frigid delays.

Another 2 inches of snow fell on the Ritz-Carlton Golf Course hours after 1 ½ inches halted play on Day 1. Complicating the schedule was a half-inch of rain that followed late Wednesday and freezing overnight temperatures that left a frozen layer of ice and snow across the Jack Nicklaus design.

“We just need to get this first round in today,” said Mark Russell, the Tour’s vice president of rules and competition.

None of the opening 32 matches was completed on Day 1 and the top-seeded players – including world No. 1 Rory McIlroy and No. 2 Tiger Woods – were about an hour away from teeing off when play was first halted.

Officials had originally hoped to complete Round 1 and start the Round of 32 just past midday on Thursday. With the delays encountered Thursday morning, concluding Round 1 before nightfall now appears to be a more realistic goal. Sunset, on a clear night, is 8:16 p.m. ET.