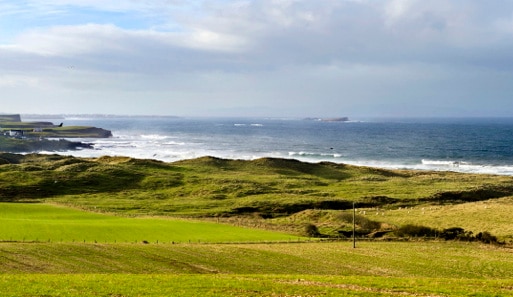 Big news for fans of golf in Northern Ireland today: Bushmills Dunes, a proposed 18-hole links course and hotel minutes from Royal Portrush and Giant's Causeway has finally been given the green light by Northern Ireland's High Court.

More on today's ruling can be found in this article posted by the UK Telegraph.

Last year when I attended the The Irish Open held at Royal Portrush, there was an air of disappointment after the National Trust announced intentions to file for a judicial review of the project. They argued the construction of the resort could cost Giant's Causeway its UNESCO World Heritage designation (which seemed difficult to believe considering you couldn't see any of the course or hotel from the Causeway). Today, that claim was thrown out by the courts and Bushmills Dunes developers can now proceed. The golf course, set on coastal dunes land beside Bushfoot Golf Club, will be designed by David McLay Kidd.

Dr. Alistair Hanna, the Northern Ireland-born developer of Bushmills Dunes who has been pursuing this project for 20 years now, released a statement following the ruling:

'My team and I are focusing on turning the plans for one of the most spectacular golf developments ever seen in Ireland into reality,” said Hanna. “Work will start as soon as possible now that we have been given the green light following a judicial review of the planning application.

'Not only will the resort provide a world-class golf links course and facilities attracting thousands of visitors each year, it will also protect the vulnerable topography of the coastal area which has been left vulnerable following decades of neglect.”