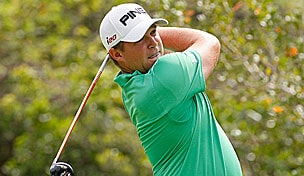 SAN ANTONIO – Daniel Summerhays considers himself a perfectionist, which is a troublesome trait for a PGA Tour player.

He wants his ball-striking to be perfect. His short game, too. Both of which are unlikely propositions.

As a junior and college player, however, Summerhays said he was revered by his peers for his putting prowess.

“I didn’t realize it at the time,” he said, “but they would say, ‘Man, you made everything you looked at.’”

Not so on the PGA Tour, however. Summerhays has never finished better than 120th in strokes gained-putting in his first two seasons on Tour, and this year, he ranks 118th.

He was trying to be too perfect with his stroke, rather than marrying the speed and slope.

Conversations with his father, Lynn, began to change his expectations, and a perfect example of his new approach came Friday on his final hole, the par-4 ninth, always one of the most difficult at TPC San Antonio. Summerhays had a slippery, sharply breaking 7-footer for bogey – “Just what dreams are made of,” he joked – and poured it into the middle.

Through two rounds of the Valero Texas Open he is at 6-under 138, tied for the halfway lead.

“It all cycles,” he said, “and I feel like I’m creeping up back and, hopefully, making the valleys not so low.”