No charge from Woods on Moving Day 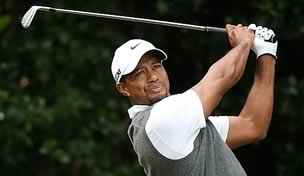 Getty Images
SPRINGFIELD, IL - JUNE 06: Michelle Wie hits her fourth shot from the rough on the 16th hole during the third round of the LPGA State Farm Classic golf tournament at Panther Creek Country Club on June 6, 2009 in Springfield, Illinois. (Photo by Christian Petersen/Getty Images)  -

Inherent in Tiger Woods’ game plan to play conservatively off the tee at Royal Lytham was a supreme confidence in his irons.

Saturday at the Open Championship, Woods wasn’t quite as sharp with his irons – or, for that matter, with putts inside 10 feet – and he’ll enter the final round five shots behind leader Adam Scott.

Woods bogeyed two of his first three holes and struggled to keep it around level par all day. Though it wasn’t quite Saturday at the U.S. Open – when he shot 75 to plummet out of contention – Woods still remained in neutral on Moving Day at the British Open.

The former world No. 1, of course, never has won a major title when trailing after 54 holes.

Will he need to abandon his conservative play to reverse that trend?

“I still have to go out there and execute my game plan,” Woods said. “When you’re behind you have to make birdies, but we don’t know what it’s going to be like tomorrow; it’s supposed to blow. I still think that I have to go shoot an under-par round.”